Review: Not My Romeo by Ilsa Madden-Mills (The Game Changers #1) 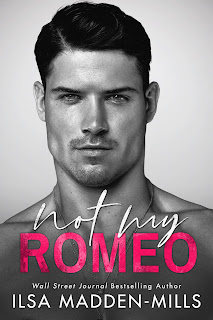 “My nana used to say that broken people love the hardest because they appreciate the things that make their heart beat. Do I make your heart beat?”


I read Not My Romeo four months ago courtesy of an advanced copy from the publisher, Montlake Romance, and I declared it my favorite book from Ilsa Madden-Mills. I've done a re-read as a refresher in order to finally pen my review, and even this second time around, it's still as hearty and heartwarming a romance as it was when I first met Jack and Elena. This also happens to be kick-off to Madden-Mills's new series, The Game Changers, and I'm already eagerly awaiting the rest of the books AND wishfully thinking there will be two or three more books--at the very least!--for readers to look forward to because I adored this cast of characters. More on all that later in this review.

Not My Romeo is the story of Elena Michelle Riley and Jack Eugene Hawke, aka Elena and Jack, aka Juliet and Romeo (not to be confused with the potbellied teacup pig by the same name). She's a twenty-six-year-old librarian with a talent for designing and making lingerie from Daisy, and he's a twenty-eight-year-old the star quarterback and team captain from Nashville. She seems prim and proper and all things nice but has a wild streak to her, and he's got a bad boy reputation earned from not-so-nice tall tales and misconceptions yet is rather quiet and shy. When they first meet, it's a case of mistaken identity. After their one night together, though, there's no mistaking that it wasn't enough for either of them, but will all their issues and pasts turn this from a romance to a tragedy?

It's official: THIS book is my favorite one written by Ilsa Madden-Mills. It has everything I could have hoped for: heart, heat, humor, and angst. But that's over-simplifying it. Don't call this a sports romance because there's very little of actual football on the field, although we do get some of the behind-the-scenes stuff, i.e. working out, public relations, injuries, and press conferences. This is, however, very much a romance, and one that has depth to it even as some may feel it skims over the sports part (which is why I feel labeling it as such is a disservice to the story). The romance started off as a no-strings-attached, one-night-only sort of thing, but the connection the main characters shared demanded that it be explored further. Naturally, there are complications, and I'm not talking about simple ex stuff either. Elena and Jack's tale highlights how vital trust and communication are in relationships.

Speaking of Elena and Jack, these two were just the tip of the iceberg as far as the wonderfully unique and quirky cast of characters is concerned. We've got Elena's awesome best friend, Topher Wainscott, her protective and nosy mom and aunt, Cynthia and Clara, respectively, her wee bit insecure younger sister, Giselle, and her precious pig, Romeo. Over on Jack's side, there's Devon Walsh, his flirty best friend and teammate, Aiden Woods, his cocky backup and teammate, and Quinn (whose last name wasn't mentioned), his foster brother and close-in security. There are other people who caught my attention--Scotty the mailman who has a thing for Aunt Clara, Laura and Timmy, the mother and son who becomes one of Jack's ties to Daisy, and Patrick, the new pastor and possible date. I already know who book two is about, so I'm hoping at least three other people get books (two of them together, ehem). Because a beginning as fantastic as Not My Romeo deserves numerous follow-ups. Five-plus stars. ♥

Purchase Not My Romeo on Amazon.