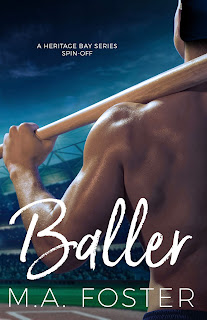 Baller is a standalone in M.A. Foster's Heritage Bay series and the fifth book, following Jaybird, Mackenzie, Cougar, and Marriage, Mayhem & Happily Ever After. While you can truly read this new book separately from the first four, if you're like me and you like reading books in a series in order, especially because there are recurring characters throughout, I highly recommend you go ahead and read those four first.

This is the story of Liam Mackenzie and Vanessa Abbott, who met when he was eighteen and she was fifteen and fell in love four years later. But secrets were kept and mistakes were made, leading the two of them to go their separate ways after two years of being a couple. Five years pass, and when Liam sees Vanessa again, he knows he still loves her--but he knows another man loves her...enough to marry her.

Liam and Vanessa's story is very much one about second chances, and when it comes to romances like this, what led to the original break-up can be a hit-or-miss sort of thing. These two were young when they split (he was twenty-four, she was twenty-one) and there was a lack of communication. They had a lot of growing up to do (more so even five years later), but it all made for a good read. Four stars go to Baller.