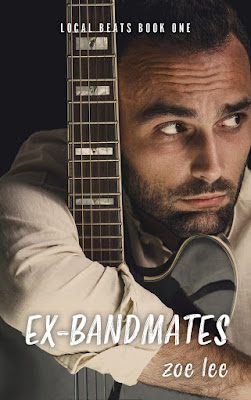 About Ex-Bandmates
Asher
From the second Lucas Carlson shows up in my garage for band practice, I’m drawn in by his eyes, his awkward rambling, and his incredible musical talents. But we share a best friend, and he’s only our temporary drummer while he’s in Chicago for a summer internship. It should be easy to ignore the way he brings something out in me that no one has before.

Lucas
Asher Bernthal is a grumpy stockbroker whose band, Signal Fire, is vital to my best friend’s happiness. I don’t want to mess it up for her, so all I have to do is drum and keep my head down. It should be easy not to crush on a man so beyond my grasp, who writes lyrics that pierce straight through me.

Despite all of the reasons to stay away, we’re drawn together and bring something new out in each other. Every song pulls us closer together, but we won’t be bandmates forever.

This is the first book in the Local Beats series, an 80,000-word MM romance featuring musicians with day jobs, a night club, and lots of songs, with a guaranteed HEA and no cliffhanger. 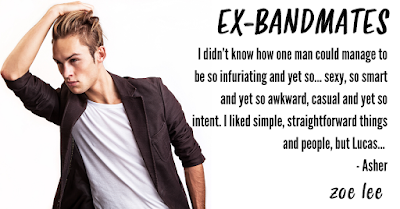 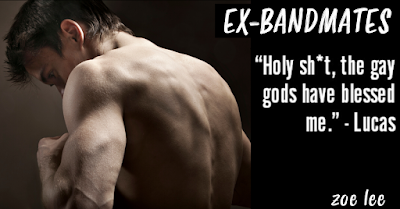 An Excerpt from Ex-Bandmates
Asher
“Hey hey,” Amy said once we were up there, shimmying a bit. “It’s about to get soulful up here!”

Dan pushed Lucas so that it was Dan, Lucas, and me ranged just behind and stage right from the girls. “I hope you know how to shake it, Lucas,” he said with a giant, happy beaming smile.

Before Lucas could seem to decide if he was going to puke or shake it, the song started.

I grinned, immediately putting one hand on my hip and bopping my hip and shoulder, recognizing the opening bars of Aretha Franklin’s ‘Chain of Fools’ right away.

Lucas hissed when the girls started belting it out.

I looked over and found him doing the exact same classic soul back-up singers’ moves that Dan and I were executing, while Dan and I also chimed in with our part of the song. Lucas’s mouth shaped the words perfectly, but I knew he wasn’t actually singing because I was too close to miss it if he were.

Leslie moved to dance right up in Lucas’s face, her hips swiveling and her finger crooked, making the audience whistle and cheer, and I heard Tilda yelling loud and clear from our table.

Lucas’s chest started rising and falling like it had when we’d shared my shower, but it wasn’t lust… not exactly. When Leslie took a step back towards the mic, it was as though Lucas was hooked to her and had no choice but to take a step forward, even though I could see him gulp, paling.

Leslie kept her eyes on Lucas in challenge and then, with a flourish, invited him up to the mic.

Lucas’s eyes closed for a beat and then…

Oh fuck. I swear my cock turned to fucking steel—titanium—whatever the hardest metal in the known universe was—within one measure of him fucking singing. It was more than hitting all the right notes, the little trills and gentle vibrato of Aretha’s voice, more than the way his voice filled up the space like it was coming from everywhere at once, more than the way he was working his hips from side to side like was in Dreamgirls. It was the way that he utterly understood what he was singing, as if he had written the song himself, experienced this himself and knew every nuance of it, as if it was happening to him at that very moment, without it being melodramatic at all.

The audience had to be going wild, but I wasn’t paying attention to anything but the fraction of his face I could see, and Leslie’s full profile, the visible eye full of tears.

The song ended and Lucas bolted off the stage, pushing through the people complimenting him, and made for the bar as if his ass were on fire—or under fire.

Amy grabbed my arm and hauled me back to our table and I went along like a zombie, letting her shove me into one of the chairs when we got there. Dan patted my shoulder as if he pitied me.

“Oh fuck,” I whimpered again, slumping until my too-hot forehead settled on the rim of a water glass. “It’s not just the voice, it’s—”

“Damn, Asher,” Tilda whispered, “you are so fucked.”

“Leslie, you evil witch,” Lucas shouted from behind me, but I didn’t move, and he probably didn’t notice because he was ranting now, his shouts lowering in volume to whisper-yells, “I cannot believe you did that to me, that was a fucking cheap shot, and to drag Amy into your scheme!”

“You’re a fucking evil witch,” Amy cried. “How could you hide that voice from us!”

“No, he can’t sing if he’s in the penalty box,” Amy argued, fucking up Dan’s sports metaphor without noticing. “You’re an amazing drummer, but like… why…”

“How about a round of shots?” Leslie interjected as if that would derail things for long.

“You’re not off the hook!” Lucas grumbled, but he seemed like he was already losing steam. Leslie clicked off towards the bar to get the shots, and then he asked, “What’s with Asher?”

Tilda, Amy, and Dan snickered and I gave them the finger without moving otherwise, not even knowing if Lucas could see it or not since my eyes were still squarely aimed at the table.

Tilda took a little bit of pity on me and said, “Just brooding like usual. Ignore him.”

Lucas’s hand appeared in my field of vision, his pinkie tapping a quick beat. “Asher?” he checked in very quietly, as the heat of his body sizzled my arm and neck and ear nearest to him. “Are you okay? You’re just kind of… looking defeated over there.”

“Shots!” Leslie exclaimed, saving me from having to come up with a response.

They shot the shots, while I didn’t move, staring at Lucas’s hand now. In the grand scheme of things, it was an ordinary looking hand. Maybe the fingers were a little more graceful, the veins a little more prominent, the freckles a little less common, but it was still just a hand. At the same time my brain knew that, other parts of me, less intelligent and more fucking unrealistic, head-in-the-clouds, knew that Lucas’s hand was extraordinary, magical. It was one tool that he used to express himself, to display his talent and his skill, to punctuate his words, and to show desire and care.

If I was this obsessed with his hand, then how obsessed was I with the rest of him? 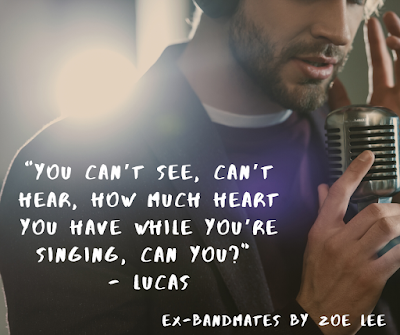 About Zoe Lee
Zoe Lee writes contemporary romances and believed everyone will get extraordinary love stories since before she ever fell in love. She lives with her family near the mountains in Colorado, where she writes while listening to music, never drinks coffee, reads books in one sitting, and watches too many movies and TV shows. She’s been writing since she was a kid, but luckily she knows how grown-ups work now. Mostly.