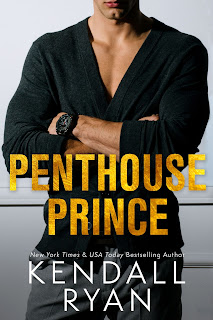 Kendall Ryan has brought together three popular romance tropes--single-parent, second-chance, and falling-for-your-best-friend's-sibling--to bring readers Penthouse Prince. This is a standalone so no other books need to be read in order to enjoy it or understand what's going on. Lexington Dane may have been Dak Stewart's best friend, but what many people didn't know was that he was also Corrigan Stewart's boyfriend--Corrigan, aka Dak's younger sister. She shared many of her firsts with him, but even that wasn't enough for him to make her any promises. Heading off to college, Lex ended things with Corrigan and lived his life in New York over the next decade, creating a successful business that earned him the nickname "Penthouse Prince". But now with a two-year-old daughter he's caring for on his own and a mother diagnosed with cancer, the time's come for him to move back to North Carolina to be closer to his mom. He's also going to need a nanny, and his best friend suggests the best person he knows. She happens to be a first grade teacher...and none other than Dak's sister and the girl whose heart Lex broke ten years ago--Corrigan.

Ah, this book was such a treat! I love a second-chance romance where the forgiveness is earned and there's a true feeling of redemption. I'm all for the groveling, especially because I'm not a huge fan of unresolved issues that are quickly swept under the rug. For the record, the Lex readers meet is more mature--he's driven but always makes time for his daughter, Grier, and moves back to North Carolina for his mom--so it's not like he's some evil ex. Yes, the manner in which he ended things with Corrigan was less than ideal, but I understood why he felt that this was the best thing to do at the time. Sometimes, that time apart is what helps you grow and flourish, and I'd say that's exactly what happened to both Lex and Corrigan. Speaking of Corrigan, kudos to her for sticking to her convictions and knowing when to let go of her anger. There's a pinch of angst, but it's still a fairly lighthearted read, and one that I really enjoyed. Penthouse Prince is another winner from Kendall Ryan, and it gets 4.5 stars.