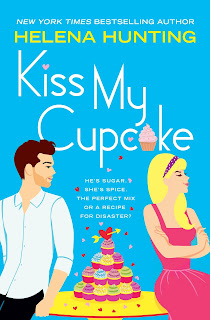 Helena Hunting's books never fail to put a smile on my face while and after I read them, and that streak continues with her latest standalone romantic comedy. Kiss My Cupcake is an enemies-to-lovers story about a baker determined to make her new cupcake and cocktail business a success and the sports bar owner who's mere presence is wreaking havoc on her and her shop. Blaire Calloway and Ronan Knight push each other's buttons like they were born to do it. Their mutual, unspoken attraction to one another was an annoyance more than anything else because you certainly can't act on such a thing when you're adversaries. But then they find themselves a common enemy. A truce is necessary in order to claim victory, but when it's over and done with, they'll be back to opposing sides. There's simply no way that Blaire is falling for someone like Ronan, no matter how much she realizes that maybe there was more to him than she once believed. Love and all that can kiss her cupcake.

Blaire and Ronan's story was a joy to read, one that gave me lots of heart and humor with a pinch of angst to keep me happy. I so appreciated Blaire's go-getter personality. She had dreams and ambition, and she wanted to achieve all of it by putting in the work necessary. She was strong-willed and independent, but I also liked seeing the softer side to her, one that was brought out when she was with those she care about the most, and one that was more inspired to come out and play when Ronan came along. Speaking of Ronan, the guy could probably charm the heck out of anyone, but I loved that Blaire was someone who didn't easily swoon over said charm, making Ronan work harder for her love and trust. After all, there's a reason why there's a saying about having a greater appreciation for the things that require more of us. Kiss My Cupcake was a sweet and sexy romance with all the feels, and it gets 4.5 stars.