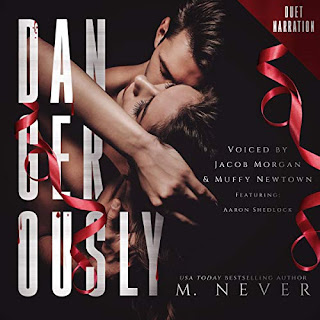 Note: The audiobook was provided by the author via Foreword PR & Marketing.


It's been some time since I last read something from M. Never--this is life when you have so many books yet so little time--so when the opportunity to listen to her latest audiobook, I hoped right on it. Dangerously was going to be my first ever audiobook from the author, and with three narrators that I already knew were rather awesome at their job thanks to previous experience, I knew I was in for a treat and a half. It also so happened that I had the eBook edition of the story on my tablet courtesy of my Kindle Unlimited subscription, so this was more of a read and listen sort of thing.

Written by M. Never and narrated by Jacob Morgan and Muffy Newtown with the special participation of Aaron Shedlock, Dangerously is the story of Fallon McNamara, a woman considered a femme fatale by those who have crossed paths with her. She's good at her job, and it's one that pays rather well. She's in demand, and her handler, who just happens to be her best friend, March, makes sure everything goes according to plan each time she's got a new job. The game changer, however, comes in the form of an Irishman named Declan O'Dea. While their time together was brief, two years later, their worlds will clash. Who will be left standing?

This is one of those books where I honestly feel that it will serve you best if you go in blind, which is I'm trying to keep any descriptions or details brief and vague. M. Never has penned a story that features a strong female main character, one who's persevered, surviving the most traumatizing of pasts to stand up for herself and show that she isn't one to trifled with. Fallon may have been known as the "lone red wolf", but she also happened to have those she welcomed into her confidence--into her heart: Farrah, March, Declan (aka Dax), and Aisling. The roles they play in her life are ones that you will have to discover when you listen to this well produced audiobook.

Speaking of the audiobook, I must say that I need to tip my hat off to whoever had final say in choosing the narrators. Aaron Shedlock may be more a featured voiceover talent, but the guy is so darn good at what he does that even with the limited airtime, he makes his presence known. Muffy Newtown, whose casting may have given me pause because I'm more used to her voicing lighter fare, but within the first five minutes, any doubts were abolished, and I couldn't imagine anyone else bringing Fallon to life. And then there's Jacob Morgan, who just happens to be one of my all-time favorite narrators. This was, hands down, his best work yet. That Irish accent was spot-on and he seriously has to be nominated for this standout performance. These three narrating a well-crafted and intensely provocative story of love and revenge from M. Never? Absolutely and Dangerously perfect. Five-plus stars.