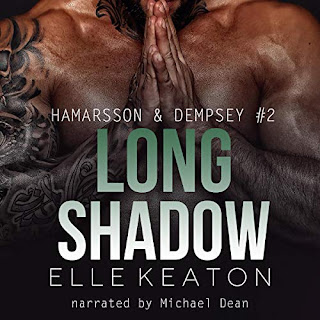 Note: The audiobook was provided by the author via Gay Romance Reviews Tours & Promo.

I thoroughly enjoyed the first audiobook in the Hamarsson & Dempsey series, so it goes without saying that I was looking forward to listening to the second audiobook as well. Long Shadow continues the story of the titular characters, Niall Hamarsson and Mat Dempsey, so it is NOT a standalone. Readers new to the series will have to read the series starter, Conspiracy Theory, before heading into Long Shadow in order to have the best kind of reading experience and better appreciation for these characters and what these men go through as their story and relationship progress.

Just when Niall and Mat have made inroads in their relationship, things between not only stall but seem to take a leap backwards. Mat would love nothing more than for Niall to consider some sort of future for them, but with Niall actively avoiding Mat, communication between them is at a standstill, leaving Mat at a loss. To make matters worse, almost all of Mat's deputies seem to have been taken down by the same flu strain, leaving him to pick up much of the slack. But as overworked as he is, he's vowed to be patient with Niall, but will Niall's realization that he and Mat are stronger when they're together simply fall to the wayside with a killer on the loose?


Once again pairing Elle Keaton's writing with Michael Dean's narration, Long Shadow kept my interest for the most part. Niall had a lot of personal growth here, which was a long time coming and rather necessary if there was any hope for him and Mat to actually move forward. Mat, as always, was a pillar of support, and not just for Niall. The guy has more patience in his pinky finger than I do in my entire body, and kudos to him for that. The suspense and mystery aspects were interesting, although in comparison to the first book, it lacked some oomph. While the story may not have been at par with its predecessor, the narration was spot-on as always, but then that's what I've come to expect from Dean. Five stars for narration, and four stars for story.