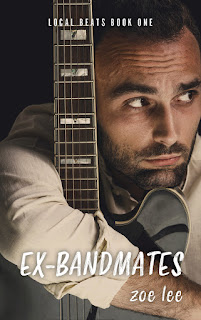 Ex-Bandmates is my first-ever read from Zoe Lee, and it also happens to be the first novel in her Local Beats series. And did I mention that I had angst and lots of it? For anyone familiar with my reviews, I've made no secret of my, erm, addiction to all things angsty. But hey, I'm a picky angst addict. If it's angst thrown in for the sake of nothing more than stirring up drama, no thank you. Also, quality of writing is a big thing for me. Guess what? This author served up the angst and goodness gracious me but did she bring it in the best ways possible. Talk about a great start to a new series.

This series starter is about a thirty-year-old successful stockbroker named Asher Bernthal who finds joy and fulfillment in what he doesn't do during office hours: make music with his band, Signal Fire. He and his bandmates have reached a certain level of comfort with one another, with each one knowing their role and the routine that they've created. But when their drummer get sick, he's taken aback when he's informed by one of his bandmates that they've got a temporary replacement ready and raring to go: twenty-three-year-old Lucas Carlson. The younger man is only in Chicago for a summer internship, but that's all it takes for both their lives to change.

Whatever it was that I thought this book was going to be about turned out to be so much more, so I've purposely tried to keep the details of the story line as limited as possible because, hello, spoiler-ville, and I really want readers to experience Asher and Lucas's story as it happens WHILE they read the book. I loved seeing how these main characters evolved as their lives merged and diverged. Their story developed in a way that I felt was necessary because they did have to come to certain realizations and sometimes that can only happen after you go through situations and events, both good and not-so-good. Zoe Lee may have been a new-to-me author, but now, I can't wait to read more from her and the Local Beats series. Ex-Bandmates snags five stars.