Review: The Reality of Everything by Rebecca Yarros (Flight & Glory #5) 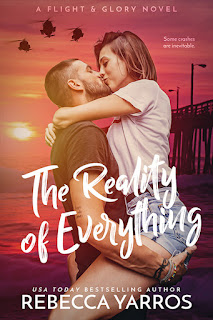 “I've waited my entire life to love you, Morgan. Everything that came before was just to prepare me for your arrival, to teach me how to love you.”

“I don't want to fall in love with you,” I whispered.


This book. God, I've been waiting for book for what feels like forever. Because there was still one more story that needed to be told within the Flight & Glory series, but while I was reading this fifth and final (gasp!) F&G novel, I realized that there were two stories within its virtual pages, and they both had me in tears at times, grinning because of the swoon-worthiness of it all, and ultimately, speechless but with a heart that felt full. It may have been over four and a half years between the release of books four and five, but Rebecca Yarros made every single day of that wait so damn worth it because the reality of reading The Reality of Everything? It was EVERYTHING.

Moving from her home state of Alabama to buy a beach house in Cape Hatteras, North Carolina may have seemed impulsive to some, but twenty-four-year-old Morgan Bartley needed this. She had a job waiting for her at the local elementary school and she was going to spend the summer giving her new home a much-needed makeover. Okay, it was more of a much-demanded renovation, but this could very well be the diversion that will spare her, even if only temporarily, from the grief of losing the man she loved and thought she'd finally have a chance at forever with. What she doesn't need is the kind of distraction her neighbor is. Twenty-eight-year-old Jackson Montgomery is a gorgeous single father with an adorable five-year-old daughter named Finley. So what if she's drawn to him as much as he is to her? She already fell for a pilot once; she refuses to do it again with this Coast Guard SAR pilot.

A quick note: Inasmuch as The Reality of Everything is the story of a different couple in the Flight & Glory series, I feel readers will have a far better appreciation for not just Morgan's story, but that of the recurring characters, particularly, Joshua and December Walker (Full Measures and Hallowed Ground, books one and four, respectively), Jagger and Paisley Bateman (Eyes Turned Skyward, book two), and Grayson and Samantha Masters (Beyond What Is Given, book three), and William Carter (Eyes Turned Skyward, Beyond What Is Given, and Hallowed Ground). They all comprise a loyal and close-knit group of friends that have been through love and loss. Yes, that'll mean FIVE books to read, but I promise, each one is a heartwarming novel.

What can I say about Morgan and Jackson's story that will properly and wholly explain how great of an impact it had on me? The Flight & Glory series starter, Full Measures, was my introduction to Rebecca Yarros's writing back in 2014, and having read all of this author's books, Josh and Ember, the main characters from the aforementioned debut from Yarros, have remained my favorites. Then there's Will, a character that is more peripheral than central, yet his presence in the lives of the rest of the recurring cast of Flight & Glory characters is pivotal, and he also happens to be a personal favorite of mine as well. Morgan and Jackson have made their presence known--although Morgan was introduced in Eyes Turned Skyward, and continued part of the cast in the next two books, same as Will--and what a mark they left on me.

There was such a bittersweet tone to this story, but damn, it was such an eye-opener for a reader like me because I've followed this series from the get-go. I saw the other couples, not in a whole new light, but more of seeing them from a more realistic perspective rather than the reverent one that they've been in the past few years. Then there was Morgan, who was still mourning the loss of someone who owned her heart even though they never fully had the opportunity to be the "more" that they could have been. She was hurting and grieving but she didn't need anyone to save her. Nope, this woman could save herself, thank you very much, but she also knew she couldn't do it alone, which was something I loved about her. As for Jackson... Le sigh. Yeah, the guy just hurdled over every other guy on my list of favorite male main characters, and now, he and Morgan are sitting atop their respective lists, and rightfully so. These two apart and together were forces to reckoned with.

The Reality of Everything was a beautifully penned romance--a story of fortitude and resilience, of acknowledging the past and giving it the respect it deserves but also realizing the importance of the present and the need to take chances in order to have a future worth living. It reminded me that our experiences are distinct, and sometimes, even though we all go through the same event, our viewpoints aren't always the same and what we went through affects us differently. This was such a full circle experience for me, and I honestly couldn't have concocted a better way to close out the Flight & Glory series, which is one of the most memorable and heartrending yet inspiring series out there. Would it be too much to ask for a spin-off with Jackson's fellow Coast Guard guys, or how about the second generation of F&G, i.e. Josh and Ember's, Jagger and Paisley's, Grayson and Sam's, and Jackson and Morgan's kids? Or here's a thought: Maybe both? Hey, you never know, so I'm putting it out there. Fingers and toes crossed, and I wouldn't say no to starting a petition or a novena or two. Just saying.

Whatever Rebecca Yarros has in store post-F&G, I'll be there for all of it. After all, she may have been an author for me to keep an eye on after I read Full Measures in 2014, and here we are, several novels, novellas, and short stories later, and every single time, she's proven that the time and money I put into reading them has been more than worthwhile. The Reality of Everything isn't just a must-read; it's a story that needs to be delved into and experienced. My only word of warning: have tissues on hand. All the stars, people. Each and every I can give it. It goes without saying that this book is one of the best novels for 2020 and beyond. ♥


Read my reviews for the Flight & Glory series:

Beyond What Is Given (book three) - five-plus stars - My Review

Purchase The Reality of Everything on Entangled Publishing | Amazon | Apple Books | B&N | Kobo.