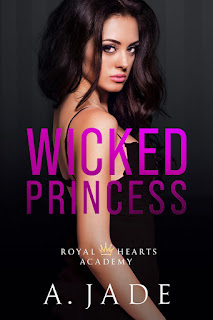 Oh my... I did NOT see that coming, and by "that" I mean how everything played out in Wicked Princess, the third book in A. Jade's Royal Hearts Academy series. I had expectations. I mean, come on, who doesn't have expectations when it comes to a series that you've followed and an author whose worked you've enjoyed in the past. So yes, I had expectations, and no, they were not met. HOWEVER, I'd like to explain that statement of mine. Whatever I assumed was going to happen in this book, and that includes who I thought the female main character was going to be paired with, didn't. Does that mean that the book was terrible? No. So, maybe I should change "expectations" to "assumptions" because I thought everything would go one way, and it didn't. You know what they say when one assumes, and well, I assumed, so... It is what it is, fellow readers.
Wicked Princess is Bianca Covington's story, and she is THE Queen B--and that "B" isn't just for the initial of her first name. She's got a reputation, one that she has no problem with, especially when it gets her whatever and whoever she wants, whenever she demands it. She's her family's princess and she is every bit as wicked as her peers see her to be. But all it takes is one accident, and Bianca's world is upended. She doesn't recognize the person that she's told she is, her memories limited to what remains within her reach. Everyone else, though, has no problem remembering the Bianca that was, and one of her victims becomes her lifeline. The boy she once bullied is the one she's now besotted with.

Let me just put this out there: The series does NOT end with this book. I know, I know. I am one of many who thought this was the series ender, but after reading this book, it's clear that all things Royal Hearts Academy does not end here. The Bianca in this novella is nothing like the Bianca readers loved to hate in the two novels, and the guy she's with here isn't the guy I thought she would be all coupled up with. I'm purposely not mentioning who the guy is because I think it may be spoiler-y for those who have yet to read the book. To be fair, this book is NOT a disappointment. It wasn't what I thought it was going to be, BUT that doesn't negate the fact that it had and held my attention for the amount of time I spent reading it. My curiosity isn't just piqued, it's on the edge because that ending--and by "ending", I mean the bonus epilogue--has me itching to get answers as to what the heck is going on! A. Jade's decision to let this book play out the way it did may not make her a wicked princess, but it could very well make her an evil genius. 4.5 stars!
-------------------------

Read my reviews for the Royal Hearts Academy series: