Review: The Trouble with Quarterbacks by R.S. Grey 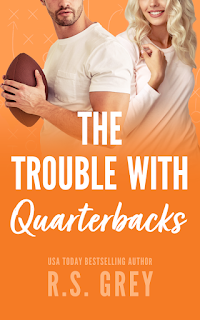 A British transplant working as a preschool teacher while moonlighting as a waitress in a club and an American professional football player who has a nephew in the very class said Brit teaches? Oh, and did I mention that she mistakenly thinks he's a FOOSBALL player when they first meet? That sets things up quite hilariously for the main characters of R.S. Grey's newest romantic comedy standalone, The Trouble with Quarterbacks. Twenty-four-year-old Candace Williams is as smitten by her student Briggs's twentysomething uncle as he is taken by her. She may have misheard when he tried to explain what he does for a living, so she's definitely not prepared when she realizes just how big of a deal Logan Matthews actually is. Dating a student's uncle may not be a hurdle, but being with someone that famous could be a challenge.

Can I just say that this book had me visualizing it as a rom-com film in my head? The cast of characters is composed of several female characters who rarely hesitate saying whatever they're thinking and barely hold back on expressing their feelings and a few male characters who are honest-to-goodness nice guys with naughty streaks to them. I appreciated that miscommunication wasn't used as a ploy to wreak havoc between Candace and Logan (although there may have been a smidgen of it close to the end). More often than not, when either character needed clarification about something that was bothering them they did the unthinkable: THEY ASKED THE OTHER PERSON. A novel idea, yes? Gah! I loved it. With loads of humor, heart, and heat, The Trouble with Quarterbacks tickled my fancy and then some. 4.5 stars!

Purchase The Trouble with Quarterbacks on Amazon.