Review: Have Mercy by Christina Lee 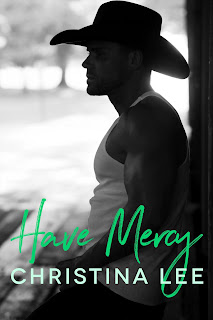 "I see how you look at me." When Julian's voice rang out in the hollow space, I froze in place.

When he didn't expound, I whirled around to glare at him. "And how is that?"

He folded his arms. "The same way I look at you."


Miracle of miracles, I think it's finally happened! I've read all of Christina Lee's books, and her debut release, my first read from her, and the first book in her Between Breaths series, All of You, was my favorite until it was swiftly knocked down to the second spot by There You Stand, the final book in the same series. For more than five years, that book has remained at the top spot of all of Lee's books, even with the makeover that saw a change in title--Flip Kick--and a wee bit of touching up with the story. And then came an honorably discharged army soldier who leaves behind the hustle and bustle of New York for a far more quiet sort of hustle and bustle in Wyoming, on the farm owned by his cousin and her ex-husband, and I was smitten!

Twenty-five-year-old Julian North had no choice but to be honorably discharged from the army after a roadside bomb left him injured and two soldiers in his platoon and one little boy dead in Afghanistan. Being back in the city he considered home doesn't help to soothe his anxiousness and frayed nerves. When his mother suggests he spend some time on his cousin Sienna's farm in Wyoming, Julian is skeptical but agrees nonetheless. Maybe helping Sienna design and build a store for her business will keep him busy. Surprisingly though, he finds himself enchanted by Sienna's nine-year-old daughter, Ainsley, as well as the menagerie of animals. But it's the pull he feels towards thirty-year-old Kelly Carmichael that could very well be the most life-changing. Julian didn't think he would last more than a couple of weeks, but will starting something with Kelly last given that he happens to be Sienna's ex-husband?

Well, mercy, mercy me, but how I adored this story of a soldier boy and the cowboy he falls in love with! When Christina Lee let readers know that her next book was going to have a former soldier from the city and a farm-owning cowboy from the country, I knew it was a story I was going to need to read, and boy, did it live up to the hype I'd made up in my head. The fact that Kelly was Julian's former cousin-in-law was one complication, but then there was also Julian living in New York and Kelly firmly in place in Wyoming. There were obstacles that needed to be hurdled, and I was cheering these two on from the get-go because they deserved to love freely. too.

I was so emotionally invested in Julian and Kelly and their stories as individuals as well as their happily-ever-after as a couple. And then there were the other lives entangled with theirs--Sienna's and Ainsley's (for obvious reasons), Kelly's family's (because his father and one of his brothers were not all that accepting when he came out as gay), and to lesser extent, Julian's mom and sister (because they were accepting of his bisexuality). Don't you love it when the cast of supporting characters are notable for all the right reasons, with two who have me a tad curious (cough, Hunter and Zee, cough) and kinda-sorta-maybe-totally hoping for a companion novel in the future? And let's not forget several memorable ones of the farm variety: Phoebe and Hamlet (the pet pigs) and Mercy (the rescued horse that Julian becomes attached to).

This had a slow burn feel to it, but never to the point were it felt tedious. I appreciated seeing everything develop and evolve--from the relationship between the main characters, to the relationships they shared with the other significant people in their lives. The story ebbed and flowed beautifully, and it was one that highlighted how two seemingly different men weren't so different after all. It was about love for oneself, for a significant other, and for family, whether that family be the one you're born into or the one you create for yourself (including the four-legged variety). It was also about acceptance and forgiveness, and knowing when to let go and when to hold on. Have Mercy already has a hold on my heart, and this book hangover shows no signs of letting go, which is just how I like it. This wonderful novel is tied for first on my list of Christina Lee reads, and it has now become a 2020 favorite. Five-plus stars.

Purchase Have Mercy on Amazon.