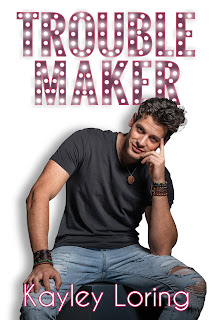 5. Because it's not just the kisses and the fingers and the orgasms. It's so many things that add up to Mr. V and me being a thing. If I can't figure out that kind of math equation, then I don't deserve to teach second graders and I definitely don't deserve Mr. V. And I do. I deserve him. I deserve everything he's willing to give me.


I may be a wee bit addicted to Kayley Loring's still unnamed series about a trio of former teen Disney heartthrobs who find the everlasting sort of love and forever kind of instant family. Reading the third novel has left me a bittersweet feeling because all three of the guys have now gotten their happily-ever-afters, but I relished every single minute I got to spend with them one last time. Each book works pretty well as a standalone, but with the recurring characters AND awesome stories, I'm going to go ahead and do readers a favor and gently suggest all three of these novels--Sleeper, Charmer, and Troublemaker--be added at the tippy-top of any to-be-read lists.

The newest book is Troublemaker, a single parent romance that finds a divorced father of a second grader falling for his son's teacher. Sounds like a story that you can find anywhere, right? Well, Kayley Loring doesn't do "ordinary" or run-of-the-mill romances, which is why I adore her writing. There's always a touch of extra, thus making every book I've read of hers so far EXTRAordinary. Such is the case with the story of Alexander Vega, who is a thirty-two-year-old single father to a seven-year-old named Ryder and also happens to be highly successful director of stage and film, and Emilia Stiles, the twenty-seven-year-old second-grade teacher from Paso Robles who's moved to Los Angeles after finally breaking up with her on-again/off-again boyfriend.

It had been a really difficult couple of days emotionally for me when I decided to pick up this book, and it was EXACTLY what I needed. There were bits and pieces about both Alex and Emilia that I recognized in myself, which made it so easy to both connect and empathize with them. This story also made me miss teaching and reminded me of one of the greatest lessons I picked up in my years in education: teachers can learn a thing or ten from their students if they only pay attention. There were also bonuses in the forms of supporting characters Atticus (fur baby cuteness!), Franklin (favorite bestie/roomie/fashion makeover non-host ever!), and, of course, Ryder and his classmates (precious precociousness!), PLUS Shane and Willa AND Nico and Kat (lazy wingmen and the women who get them), AND Grammie (super senior!). I'm seriously going to need a spin-off with all the kidlets soon. Hint, hint. If you can't tell from all my gushing, I absolutely adored Troublemaker, which gets five-plus stars.