Review: From That Moment by Carrie Ann Ryan (Promise Me #2) 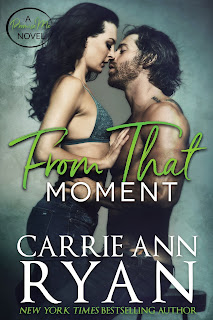 Two books in, and I do believe I'm a wee bit addicted to Carrie Ann Ryan's Promise Me series. The series starter, Forever Only Once, was a strong beginning and showed me a sampling of the promise--pun not intended!--that the rest of the series held. I'm happy to say that halfway through, this series is ticking off a whole lot of what I'd hoped and expected I'd find between the covers, which is always a wonderful thing.

Book two is titled From That Moment, and it's an enemies-to-lovers romance between two people tied together by mutual connections who now find themselves working in the same office for the next six months. Prior Brady isn't sure why Paris Trissel seems to dislike him as much as he does. After all, one of his brothers and one of her best friends are a couple, so it would be nice if everyone else got along. Maybe spending time together will allow them to be at least civil with one another. Instead, Prior and Paris begin to become friends...close friends, but he's got a girlfriend, and she's got a past that she's distanced herself from. What happens when that past comes calling?

This was a seriously good read, one that had me at the edge of my seat a couple of times, thanks to suspense factor. Prior and Paris are interesting people, and I finally found out why she was as abrasive towards him as she was. The development of the relationship from enemies--okay, not really "enemies" since he didn't have any issues with her--to friends to lovers felt quite organic, which I appreciated because it was a change of pace from what happened in book one. The mystery and suspense parts gave me pause in a good way because I had two people in mind as the villain, and it turns out I was wrong! So, kudos to Carrie Ann Ryan for that. My main reason for hesitating on giving this a higher rating was the whole angle regarding Prior's ex-girlfriend. Her actions didn't make a whole lot of sense to me. Other than that, though, From That Moment was a fantastic 4.5-starred read. Can't wait for book three!

Read my reviews for the Promise Me series:

Purchase From That Moment on Amazon | Apple Books | B&N | Kobo.