About Miss Apprehended
I've got ninety-nine problems and all of them begin and end with the Coletrain twins.

I don’t know whether to kiss her or spank her.

Either way, she’s mine.

Note: Miss Apprehended was previously published under the title Jail House Rock by Liberty Laine but has been updated for re-release.

An Excerpt from Miss Apprehended
“Stay still, Tillie. I’m sick and tired of chasing your crazy ass around town,” I snarl out to the insane female I have pressed up against the wall.

A perfectly round ass is wiggling all too enticingly against my already hardening cock, and I let out an exasperated sigh. Stupid dick. Clearly, it doesn't know what’s good for us. Peppermint and some kind of floral soap assail my senses. I almost back away so I can take a harder look at this blonde bombshell, but I refuse to be fooled again. I’ve been hunting this woman down for weeks, and every time I’ve managed to catch up with her, she has somehow managed to give me the slip. Not again. She missed her court date, and it’s my job to bring her in. I have something to prove, being the new guy on the block. I’ve only been on the job for two weeks, and I’ve spent most of it chasing this criminally deranged woman. True, her crimes consist mostly of bounced checks and small thefts, but the way she has managed to evade me these past two weeks only proves one thing—she’s a damn criminal mastermind.

“I’m not Tillie, you big oaf. Let me go. Now!” the crazy lady says while trying to turn her body toward me.

I press her harder into the wall with my body and groan. Fuck, she feels too good. She’s trying to kill me. I’ve been stabbed, beaten, and shot at plenty in my six years as a bounty hunter, but I’ve never been more convinced that someone was trying to kill me than at this moment. And she is using that smoking-hot body as the weapon. Fuck my life.

Funnily enough, I’ve never once felt this pull toward Tillie while I’ve been tracking her. But, now that I am up close and personal, I cannot help but want her. Everything about her is calling to me. Her voice, her smell—this woman is fucking intoxicating.

“Cut the bullshit, darlin’. I’ve been watching you for weeks now and you know it. I watched you walk in this door not ten minutes ago. I’m taking you in, collecting my money, and getting a good night's sleep tonight.” I’m so over this shit.

“God dammit, let me go. I am not Tillie.” She’s talking to the wall, but I’m mostly paying attention. “I’m Millie, and you are ruining my gig. My fans are expecting me up on stage any minute,” she says.

I take a look around this dive of a bar that smells like bacon and stale beer, trying to hold my smirk back. Grabbing the handcuffs around Tillie’s wrists, I spin her around to face me.

“Babe, karaoke is not a gig, and if you think it is, then we got bigger problems than a few bounced checks and some petty theft charges,” I say, taking in her curvy body, starting at the tips of her pink-painted toes. I want to pull those gorgeous toes out of the high-heeled sandals she’s wearing and take a nibble, but I know that, the moment she thinks I’m distracted, she’ll take off on me again.

My eyes make their way up smooth, tanned legs until I hit the hem of her pale-blue dress with white polka dots right above her knees. And damn, that dress perfectly hugs every curve of her body. My hand almost involuntary makes its way up to the long strand of pearls dangling around her neck. I want to pull her closer with them so I can smell her again or maybe run my tongue over her plump, pink-stained lips. Big, angry, bright-blue eyes snap me out of my lust-fueled fog. Fuck. This girl is fucking gorgeous, and I immediately know I won’t be taking her in right away.

“You’re new around here, aren't you?” she snaps at me, the ice in her blue gaze freezing me.

The corners of my mouth tip up in a barely there smile. God, I love a sassy woman. 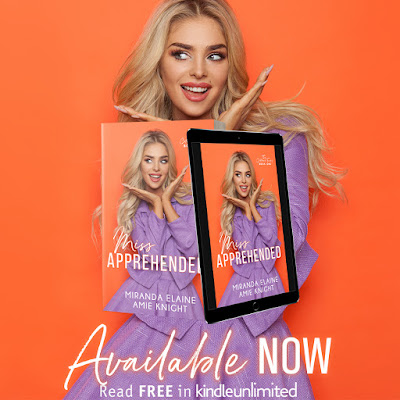 Miranda Elaine is a loving wife and barely surviving mother of three occasionally good kids. Her hobbies include lying to herself about the calories in donuts and banana pudding, as well as running out of excuses when procrastinating.

She's been an avid reader since she was a young girl. Whether she's by the pool, curled up in bed, or hiding in the closet, as long as she has a book in her hands she’s happy.

Amie Knight has been a reader for as long as she could remember and a romance lover since she could get her hands on her momma's books. A dedicated wife and mother with a love of music and makeup, she won’t ever be seen leaving the house without her eyebrows and eyelashes done just right. When she isn't reading and writing, you can catch her jamming out in the car with her two kids to '90s R&B, country, and show tunes.

Amie draws inspiration from her childhood in Columbia, South Carolina, and can't imagine living anywhere other than the South.