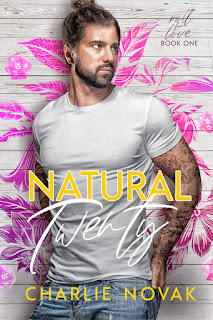 With each book of hers that I've read, Charlie Novak has slowly but surely become one of those authors who I wouldn't hesitate to reading more from. Her newest release, Natural Twenty, is the first in a new series, Roll for Love. The main characters here are a flower shop owner who looks more like he belongs in a motorcycle club than surrounded by dainty flora and a man wanting to focus more on his professional career than his personal, especially after getting his heart broken by two people he trusted--his then-boyfriend and then-best friend. Crushing on Leo (whose last name I can't recall being mentioned in the book) was something Jacob Morris shouldn't be doing, but there's something about the flower shop owner that calls to him. The two forge an unlikely friendship, but when it begins to feel like more, will Jay be able to battle his issues in order to have the best thing to ever happen to him?

This was a slow-burn sort of romance, one that allowed readers to see the foundations being formed so that Leo and Jay could hopefully have a firmer footing. They became friends first before pursuing anything more, even though the underlying mutual attraction was there from the get-go. I seriously liked these two, although if I'm being absolutely honest and if I were forced to choose between them, I'd totally pick Leo because the guy was a study in patience and understanding. Seriously, the man was a sweetheart, and absolute bonus points for being an awesome dog dad to Angie. Gah! Another favorite thing about this book was the language of flowers, something that I only picked up on a few years ago, and it was lovely to find it a sweet story like Natural Twenty. This series starter gets four stars.