Review: Riley Thorn and the Dead Guy Next Door by Lucy Score 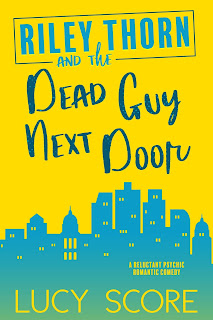 I know I have A LOT of catching up to do as far as Lucy Score's back list is concerned, but can I just say that I have yet to be disappointed by anything of hers I've read so far? Her writing is good for my sometimes lagging spirits, and when I started reading Riley Thorn and the Dead Guy Next Door, it was exactly what I needed at that point in the week. This is the story of thirty-four-year-old Riley Thorn, our eponymous heroine, and thirty-seven-year-old Nick Santiago, who is NOT our eponymous, umm, dead guy next door, I swear!
Hoping for simple and normal isn't asking for too much, right? Unfortunately, Riley Thorn's life is anything but, what with being not only divorced but broke to boot. But fate is about to throw her yet another curve ball straight to the kisser when a private investigator named Nick Santiago shows up looking for her neighbor...who may or may not be dead. Okay, he's dead. And not just the regular sort of dead either. Nope, the guy's been murdered. Now, Riley's finally on top--of a short list of suspects, and Nick is determined to prove the kinda-sorta-maybe psychic didn't do it. Easier said than done.
This was F-U-N to the nth degree. It had a touch of quirk that topped off all the hilarity and mystery plus romance between the proverbial covers. Both Riley and Nick become partners-in-(solving-a-)crime, and while they were interesting as individuals, these two were wholly entertaining coupled up. There was also this kooky cast of characters who came THIS close to being a bunch of scene-stealers. Lucy Score has obviously proven time and again that she's more than adept at writing bestselling romantic comedies, but this newest book of hers had that extra touch of something special, and I was all in for every single bit of it. How could I not be?! Five stars for Riley Thorn and the Dead Guy Next Door.

Purchase Riley Thorn and the Dead Guy Next Door on Amazon.