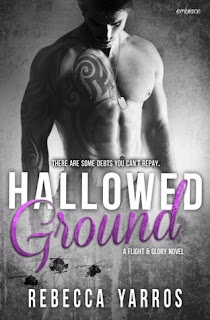 "It was impossible not to love her. Maybe a better man could have walked away and spared her this, but you and I both know I was never the better man. And yeah, you used to joke about me taking her out, but I know if you had known what would happen to you--what she'd have to endure--well, you would never have wanted me with her. I knew it, and I still couldn't help myself. I knew we'd end up here, knew what she'd have to go through, and like a selfish fuck, I kept pushing, kept showing up. She pulled me in with nothing more than one look, and whether or not she'd chosen to be mine, I just knew that I'd always be hers. And I know you're probably pissed, but I swear, I'm doing everything I can to make her happy."

Everything but be there.

Ah, where do I begin? My request to read and review the advanced reading copy of Hallowed Ground was approved in mid-December of last year, and as excited as I was to get my hands on it, I decided to wait to read it so that I could post my review closer to the book's publication date. I finally gave in and made sure I had no other books scheduled for review on my birthday because I wanted to spend that day with Joshua Walker and December Howard. These were the characters that started me on my on-going love affair with the Flight & Glory series and allowed me to discover an author whose gift for weaving stories that have such heart and can evoke a myriad of strong emotions brought about by characters who you become so heavily invested in and I knew that with this fourth and final book, I was going to be saying goodbye. Yes, I can always open my Flight & Glory books and re-read each story, but that's a different experience altogether. Reading Hallowed Ground that first time signaled an ending that I wasn't totally prepared for, even though I knew it was coming. And even after having read it and bookmarking numerous quotes and excerpts, I put off writing my review, but it's time: to bid farewell, acknowledge greatness, and give thanks.

"You are my dream now, December Howard. You are everything to me. My heart beats for you, my soul is only whole when you're near. You're my home, my shelter, my wildest fantasy, and I cannot imagine a future where you're not mine, because I'm yours in every sense of the word."

The last time I cried as much as I did while reading Hallowed Ground was when I read Full Measures in 2014. Yes, I cried with Eyes Turned Skyward and Beyond What is Given, but maybe because this last book was that full circle moment played out over three hundred pages that I hoped for, the tears were more persistent. Josh and Ember have already been through more than their fair share of heartache and challenges, but with Josh being an enlisted member of the military and Ember choosing to be with them, they knew what they were getting into--those goodbyes that you pray will lead you back to hellos in a number of months, counting the days until you're together again while spending the nights ticking off each minute they aren't by your side. So when the time comes that Josh is deployed to the one place that leaves Ember cold, the one place that took her father and nearly took Josh, all those feelings of apprehension are amplified and multiplied. We read about their struggle to hold on and keep it together and the desperate need to understand why certain choices are made and to accept those decisions and be supportive. Nothing is ever easy with Josh and Ember, but somehow, every single thing they went through is worth it.

"Use this time. Feel every stab of loneliness, relish every second you would rip your very limbs off if it meant you could spend five minutes holding them. Let it push you to be the men you're capable of, the ones they deserve, and let it push you to be even better in the air so you come home to them."

It's heartbreaking and gut-wrenching to see characters we care about experience the harsh realities of military life, regardless of whether you're the enlisted member or the one waiting at home. As much as we admire those who risk life and limb to defend whatever country we come from, a great deal of respect and commendation needs to also go out to those who send them on their way. We get both sides of that heartrending equation with Hallowed Ground. Josh has a job to do--one that he is fully committed to--but it guts him to know that his dedication to said job results in Ember fretting in the home they share, the home that was never fully finished on the inside because of his deployment. You empathize with Josh but also sympathize with Ember, and yes, I confess that there were times that I so wanted to shake some sense in Josh, but how can you question a soldier's vow to his country, even when it ranks above the promise he made to the woman he loves? And it's not just Josh and Ember who have trials and tribulations here. Jagger Bateman and Paisley Donovan as well as Grayson Masters and Sam Fitzgerald deal with the aftermath of a life-altering event, one that left me sobbing, dumbstruck and devastated over such a shock.

This book, heck, this entire series made me contemplate if I had the kind of strength and conviction to be with someone who had to put their life on the line on a regular basis, and I'm not necessarily talking about just those in the military. The heart can be a very fragile thing and the possibility of losing the person who means the most to you also increases the possibility of it breaking. But then, when you meet that one individual who makes the sacrifices worthwhile, the heart can prove to be the strongest organ you have, giving you the strength and perseverance to see each day through, believing in the love you share, respecting the choices you make together, and honoring your commitment to one another. And that's what makes the Flight & Glory series such a remarkably inspiring collection of books...We've had the privilege to watch three couples fall in love, but we also take note that their stories don't necessarily end with happily-ever-afters that have them riding off into the sunset, because they're living the kind of lives that require sacrifice--from themselves and for others--and Hallowed Ground gave us a glimpse of that because I'm sure what military families go through time in and time out is a far greater unenviable burden.

"But just in case, live well. Love hard. Try to follow a goddamn rule every once in a while, just to throw people for a loop, okay?"

So, now we're here...at the end of a series that has meant a great deal to so many and is a personal all-time favorite. I'm also coming to the end of this review and I'm still feeling as if I'm not ready to bid farewell to Josh and Ember, Jagger and Paisley, and Grayson and Samantha, as well as Will and Morgan. Hallowed Ground ties all the three books before it together in a way that I never thought possible, because those first three books stand well on their own too. But together, these four books encompass several journeys of individuals and couples that know the true meaning of the word "sacrifice" and who would choose to do it time and again because that's the kind of people they are--a distinguished breed that will always put others before themselves. January hasn't even come to an end, but expect Hallowed Ground to be on my list of best books for 2016. It's already joined its predecessors on my list of all-time top reads. Ten stars aren't enough for this series ender or the series in its entirety. Heck, not even a thousand-fold and I'm not exaggerating here. Read the Flight & Glory books. Yes, all four of them. I promise, you won't regret it. My rating for Hallowed Ground may read "five-plus stars" but that belies how much more this book is worth. ♥

"You and me?" he whispered against my lips.

"Against the world," I promised.

Read my reviews for the Flight & Glory series:

Beyond What is Given (book three) - Five-plus stars - My Review