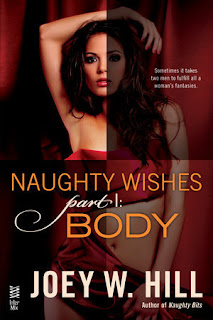 Well, well, well. I've heard of Joey W. Hill and her writing, but Body, the first part of her new four-part Naughty Wishes story about three best friends was my introduction to her and what an introduction it was. It's a short read and it does end in a cliffhanger, but then I already knew that going in, so I wasn't too frustrated with the ending. Okay, no, I'm lying. I'm frustrated as hell, but this was such an enticing introduction to Samantha Gerard, Geoff Tywin, and Chris Montague that I'm willing to try and curb my impatience, especially since the wait for the next three parts are just one month apart. We have more of Sam and Geoff in part one, but we get enough information and back story in order for us to have a good idea of how the dynamics of their friendship currently work and how Sam wants to change those dynamics. The question is: once Sam makes her desires known, will Geoff and Chris acknowledge them and finally cross that line, or will their intense friendship end up fractured and have them to go their separate ways?

This first part is indeed what it's meant to be: an introduction to three best friends who share a home together and who, if Sam gets her way, will share more than chores and expenses by the end of it all. We're also given a history as to how their friendship began, as well as where Sam and Geoff are at as far as their sexual and emotional needs and wants are concerned. Chris is mostly a mystery here because he's out of town, and I felt for the guy by the end of this book because I would have been at a loss for words and would have reacted the same way he did if I were in his shoes. We're left at a crucial turning point in both the story and in the relationship among the triumvirate, and emotions were running high by the end. I'm curious to see as how Geoff will handle the situation with Chris, because not only have they known each other much longer, there's something more going on between the two of them, something that hasn't been openly acknowledged. Naughty Wishes: Body does a fine job by leaving you craving for more. Four stars. ♥