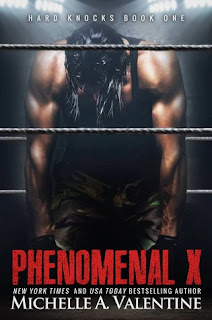 I've read romance novels that had mixed martial artists and boxers, but this is the first time that I can recall ever reading a love story that had the male lead character as a professional wrestler. I've been a wrestling fan since I was a child back in the seventies (yes, I'm dating myself here), and even though I learned that a great deal of what happens is scripted and I may not be as avid a viewer as I used to  be, the entertainment value is something that I still appreciate from time to time. So, naturally, bestselling author Michelle A. Valentine's Phenomenal X, the first in her Hard Knocks duet, piqued my curiosity, and I saw first hand Xavier Cold exemplified the intensity and drive that I've come to expect from a pro wrestler. This isn't a fluffy, sappy love story. Xavier is a complex character, but one that was worth getting to know.

Xavier Cold meets Anna Cortez on a flight to Detroit and she proves to be nothing like the other women he's met before when she turns down his advances. But, as has usually been the case in books and in real life, a man who gets rejected likes the challenge, especially when he isn't used to be on the receiving end of said rejection, and chase Xavier does, albeit in his own "phenomenal" way. It's obvious that the attraction is very much mutual but they scare one another--Xavier with his bad track record when it comes to women and Anna with her innocence and naivete. I must say that I quite appreciated the fact that these two didn't jump in to bed the first chance they got, because then it would have been just like a lot of the other books out there. Their love story plays out at its own pace and even takes an unexpected creative detour or two.

This first book does end in a cliffhanger, though I'm grateful at having had the second book ready and waiting for me to start as soon as I was done with this one. It's clear that Xavier is dealing with a lot of demons from his past, and this makes him an even more intriguing character. From his anger issues to the nightmares that haunt him, there's a darkness within him that's ready and raring to come out, especially when it comes to his need to protect Anna and when she asks to many questions about his childhood. Anna is, at times, painfully naive, but with her being twenty-one (Xavier is twenty-eight) and having lived a very sheltered life, I'll give her a pass. I did like how quick she was to defend Xavier whenever someone criticized him. All in all, Phenomenal X was a four-starred book and Xavier was the main reason for that. ♥

Learn more about Michelle A. Valentine.