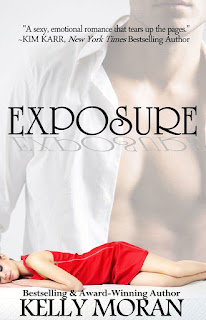 The friends-to-lovers trope is one of my favorites in the romance genre, and author Kelly Moran has taken it and added her own creative spin to it, revitalizing a theme that can sometimes come off as tiresome and redundant. Exposure is a standalone erotic romance novel with elements of suspense in it. It also happens to have two main characters--wealthy businessman Noah Caldwell and gallery owner Raven Crowne--who exude sensuality and eroticism without making either come off as tawdry or tasteless. This story is very different from the Phantoms paranormal romance series that introduced me to Kelly Moran, but I mean "different" in a good way. That sexual tension she's able to stir and sustain is ever present, but this is a new story and has new characters and you experience, rather than merely observe, everything alongside them.

Noah and Raven have been the best of friends for ten years, and Noah has been the one person that Raven can count on to ease her anxieties and to accept her wholeheartedly, perceived dysfunction and all. When he confesses that he's her longtime secret admirer and lets her know just how much he's always wanted her sexually, the dynamics of their relationship change, no matter how much they try to pretend that things will remain the same. The transition is a close-up look at how a friendship irrevocably shifts once sex is introduced and all the more when actual romantic feelings enter the picture. Things become even far more complicated when Noah's past comes looking for him. The knowledge that he's brought danger into Raven's life has Noah worried for her safety, but so does the realization that he's falling in love with her.

This was a story that captured my attention from the get-go and as it went on, it was easy to become invested in the outcome of Noah and Raven's inevitable romance. They both have pasts that have left them with baggage, and trying to deal with that baggage and being open enough to share that burden with one another is just a part of the challenge of maneuvering from friends to lovers to even more. There weren't any real surprises in the story, but I still liked how it all played out, especially when it came to unraveling whatever was holding both of them back emotionally. One supporting character caught my eye--Max Gerard, who served as primary bodyguard to Noah and later to Raven, who I think would do well as a main character in the future (hint, hint). Exposure was a seductive read, and one I'm giving 4.5 stars to. ♥