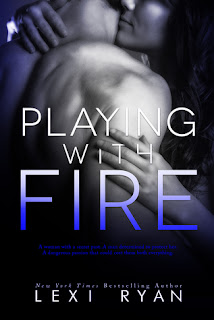 Playing with Fire is the first novel in the Mended Hearts series by Lexi Ryan, and I went into this book not having any idea that it was actually part of a larger collection of books all set in the town of New Hope, Indiana. I admit that I felt a teeny, tiny bit lost because there were obviously a number of back stories involved, but even with me taking that into consideration, I still enjoyed this romantic suspense story and felt that it was able to give me something fresh while keeping me interested throughout.

Phoenix Reid is a pediatrician in New Hope, and the town's name speaks for how Nix views her time there so far. After having escaped a dark past, she found hope in this community, enabling her to have her own circle of trusted friends while practicing her skills as a doctor. The one thing she doesn't allow herself to have is a relationship with a man, even if that man is as tempting as single father Maximilian Hallowell. Crossing the line between something platonic to something intimate should have been a turning point, or so Max thought, but Nix is haunted by a past that's decided to remind her of what she left behind.

This was a well-paced story and both Max and Nix are complex characters who have experienced their own share of heartbreak with people they thought they would spend the rest of their lives with. From what I gathered while reading this book, Max's last relationship left him at a loss and that story is told in a different series. Naturally, I'm curious as to what happened before, but enough was mentioned here that I have a basic idea of what went on. I really like Max and now I'm hesitant to read the story where he gets his heart broken because he already goes through quite a bit here with Nix as well, what with the one step forward, two steps back happening.

Nix was a curious character and I liked getting to know her better via the flashbacks, which allowed me to better understand why she was hesitant to start and then further pursue anything with Max. I felt for her as well, because she deserved to finally get her own happy ending. I grew frustrated with her at times, but she was lucky to have had Max, whose understanding and patience should have earned him an award for martyrdom. Okay, I'm exaggerating, but seriously, the man deserves a medal, but I guess his feelings for Nix were too strong for him to ignore or easily forget.

This was my first Lexi Ryan read and it's one that I very much enjoyed. There were elements of suspense and mystery that blended seamlessly with the love story going on between Max and Nix. This also had a good cast of characters, many of whom have already gotten their own stories told prior to this one, so those are going on my to-be-read list. The ending certainly leaves one curious and it is sort of a cliffhanger, but thankfully, I had the second book ready and waiting for me, so no complaints about evil cliffies. If you have yet to read Playing with Fire, I recommend you check it out. 4.5 stars. ♥