Review: Hard Ever After by Laura Kaye (Hard Ink #5) 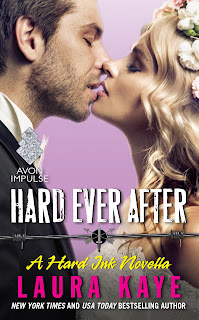 "I love you with everything that I am, and everything I want to be. Please do me the greatest honor of my life and say you'll be my wife, my partner, my best friend, my companion. Becca Merritt, will you marry me?"

"Only you. Always you. Forever you, Nick. Yes."

I've been anxious to read Hard Ever After ever since it was announced last year, and now that I'm done reading it, suffice it to say that it was worth waiting for. This was the perfect end (and yes, I know that there's another novella in the Hard Ink series) to the story Nick Rixey and Becca Merritt. They started the ball rolling with Hard as It Gets, so I think that it's only fitting that it's their happily-ever-after that closes out the story of the men and women of Hard Ink. And did you notice how the acronym for the book's title and "happily ever after" are the same? Me thinks it's a sign (possibly a purposeful one, but I'll take it as a sign nonetheless). If it's one thing bestselling author Laura Kaye has proven she's a writing goddess at, it's at novellas and how she's able to pack everything in a condensed number of pages without ever losing the story's heart and the tale being told by the characters. And yes, she's done it again with Hard Ever After. I am going to highly suggest that you read the series from the beginning in order to fully enjoy the story arc.

Maybe it's because I'm such a fan of the Hard Ink series, leading me to become quite invested in all the main characters that we met and fell in love with throughout the combined eight novels and novellas (plus one bonus short story), but I did get teary-eyed while reading Hard Ever After. Geez, this cast of characters have been through a hell of a lot, but most especially Nick and Becca, who went into the quest for the truth and justice for Nick, Becca's father, and everyone on Nick's team--both those who were killed in action and those who went on to fight by his side in the series--relying initially only on one another. I've loved these two from the beginning and we've seen how their relationship has evolved from the first book to each one that followed in its wake. Hard Ever After is the novella that brings everything full circle, and seeing just how far Nick, Becca, and everyone else had me feeling nostalgic. Of course, there's a lot of heat in the story as well. I mean, come on; it's Nick and Becca and they always make time for both love and lust.

However, don't doubt for one minute that this was nothing more than a fluff read. There's an actual story, one that has elements of suspense and mystery that make this novella live true to the standards set by the books before it, that has our band of brothers and the women they love tie up the one loose end that doesn't want Nick and Becca to get the happy ending they deserve. I am an extremely satisfied Hard Ink fangirl and I wouldn't hesitate to recommend the series to anyone who loves their contemporary romances with a good amount of action and thrills. There are good reasons I named Hard Ink as one of my favorite series for 2015: an addictive overall story arc, flawed but endearing characters, and exemplary writing. I'm never going to say "goodbye" to the series because not only was it a favorite last year but it's become an all-time favorite as well. With Hard Ever After, though, I'm now ready to see where the upcoming spin-off series, Raven Riders, plus the Hard to Serve novella, will take us next. Five-plus stars. ♥

Pre-order Hard Ever After on Amazon | B&N | Kobo.