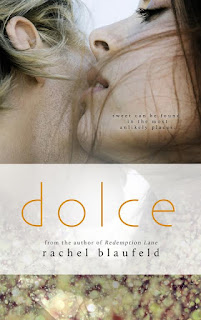 She didn’t say anything, just stared at me like she was trying to understand the opposing team’s plays. My cock was hard as shit, and my heart raced like I was at center court. I both loved and hated it. My whole life was ahead of me, and yeah, I wanted more. But was this it? This tiny outspoken woman from New Jersey who seemed to be so sure, yet unsure of herself?

Dolce is the second novel in the Love at Center Court series from author Rachel Blaufeld and I, for one, was happy when she announced that Vérité, one of my top reads for 2015, had spawned a series. While this second book was a touch more lighthearted and humor-infused than its predecessor, it still brought with it though-provoking issues such as feminism and what that concept means to women in the twenty-first century, just like the first book made me think about interracial relationships and how those in power (i.e. professors) can manipulate a situation to benefit them. The books can absolutely be read as standalones, especially since there aren't any recurring characters that appear in both novels, even though Tiberius Jones and Tingly Simmons, the two main characters from Vérité are briefly mentioned in Dolce.

Here we have a new star on Hafton University's men's basketball team--Blane "the Stealer" Steele (not to be confused with Blane Maxwell from the first book)--who ends up being forced into accepting a dare from the campus shock jock: no sex in order to win a championship. And why is he forced into it? Because he defended the radio station's intern, Caterina "Catie" Presto. There's something about the petite and curvy sophomore that calls to the junior hoopster and student, but Blane can't really do much about his attraction to and curiosity of the girl he calls Cate, no thanks to the dare. So, they stick to being friends...or at least they try, an exercise that becomes increasingly difficult since they're both drawn to one another in a way they've never experienced with anyone else. They may appear to be different but they simply click.

The love story itself wasn't riddled with too many complications, but add in a power-hungry college deejay, a college professor who's a feminist Nazi, and nosy ball babies and well-meaning friends and you've got yourself a unique romance. Rachel Blaufeld excels in giving readers something different each time she publishes a book. Even when it has an air of familiarity about it, she adds just enough to make it stand out from the crowd, and that's exactly what she's done here. It's set in a college and is about sports, but that's not what the book is all about. Dolce was about the pressures students--whether athletes or not--encounter and how they can transcend the labels and expectations placed upon them. It's also about love and acceptance and how opening yourself to both should never be a hardship or a chore. Five-plus stars. ♥