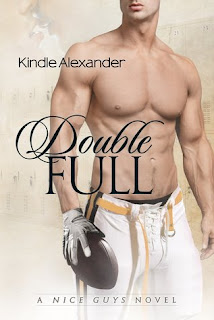 Someone smack me. Like right now. I swear, author Kindle Alexander's books have been on my to-be-read list for over two years now and with each new book that's been published, I simply automatically add it to the list. So, the fact that it's taken me this long to read one of her books is really rather sad, considering my obsession with M/M romances. And after having read the entire Nice Guys series in one go, I promise to make a point of going through all of Kindle Alexander's published works before she releases yet something else I'll need to add to my TBR list! Because if this series is a hint of what I have to look forward to with the rest of her stuff, I'm going to end up with a perma-grin from all the swoon-worthy and surprising moments to be found in between book covers. Who am I kidding? This series has made me a total fangirl.

Double Full is the first in the Nice Guys series and is a love story that begins in 2003, when college senior and football quarterback Colton Michaels decides to finally do something about his burgeoning feelings--feelings that began when they were both freshmen--for fellow senior and cheerleader Jace Montgomery. But the story takes a turn that leaves them both with broken hearts and it's when their paths cross again nearly a decade later that this unlikely romance becomes a second chance romance. We get to see Colt and Jace handle the pressures of being gay men who love each other from their perspectives as college students who are still filled with hope and idealism and then later on as men who have already experienced the pain and betrayal connected with a love affair that ended only to realize that hope isn't quite so fickle.

Colt and Jace were so different from how I initially pictured them, especially with Jace being the one who is open with his sexuality and Colt still keeping it a secret due to his first being a much touted NFL prospect and then a football pro. Colt is upfront with his feelings for Jace and there's an exuberance and giddiness to his desire to express and show exactly how he feels that's refreshingly unique and quite admirable. There are a lot of romantic gestures courtesy of Colt that make you believe that romance isn't entirely dead--even if you can only get it in paperbacks and ebooks. But if you think that this is purely a love story, you may be in for a surprise, because there's a suspense slash mystery twist that happens, one that becomes a story arc that encompasses the Nice Guys series, so yes, I suggest you read all three books.

Now, some may consider this an overly romanticized second chance love story, to the point that you may end up thinking no one could be that sweet or that forgiving, and sure, I can get pretty cynical, but I think that I loved Double Full because of the romanticism tied into it, as well as the mystery suspense story arc. I've read many a gay romance that had the main characters jumping into bed together or having the sex as the greatest pull when it came to being together. In the case of Jace and Colt, the emotions are there and the foundation of having a relationship based on actual, deep-rooted feelings of love, trust, and respect touches that part of me that believes romance isn't so hopeless after all. This series starter had more than tickled my fancy and it set the stage rather well for what was to come next. Double Full receives five stars. ♥