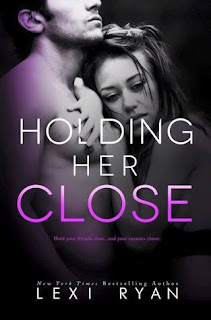 Holding Her Close is the second book in the Mending Hearts series from bestselling author Lexi Ryan and clears up that cliffhanger-like ending in the first book, Playing with Fire. Janelle Crane is an actress being accused by her ex-husband's current wife (and the very same woman he was with when he cheated on Janelle) of trying to steal him away from her and when a coveted movie role is put at risk because of this supposed scandal, she agrees to a fake relationship. That plan goes awry when the man she locks lips with at a Halloween costume party turns out to be Cade Watts, a police officer who already knows first-hand what it's like to have an actress use him for her sole benefit. Even though he wasn't the man she was supposed to kiss, things become heated between them really quickly...and then assumptions are made that lead to accusations and hurtful words. Not really the best of starts, and while Cade does come off as somewhat of a jerk for a bit, I love how he stepped up when it counted, even without anyone asking him to.

This novel is like the movie The Bodyguard but with the fake relationship mixed in with very real attraction simmering between Janelle and Cade providing that much needed interesting touch to make it stand out. Even in book one, it was clear how protective Cade was of those he cared about or felt a responsibility toward, so his actions and reactions here weren't really a surprise. However, it was Janelle who pretty much shocked me here because she was so far and away how I would have pictured here and that made her not just a main character worth getting to know but one worth cheering for. Yes, we get to meet her in the first book, but it's in this second book that we truly get to know how classy of a woman she is. I loved how, without her having to do or say much intentionally, she was able to show Cade that she is nothing like how he initially perceived her to be. In turn, I applauded how Cade owned up to his mistakes.

Just like in Playing with Fire, there are elements of suspense and mystery in this sequel, and even though I figured out who was behind the stalking and threats, it sure as heck played out and was revealed in a way I would never have predicted. This was such a good story and the writing was exceptional and on point. Lexi Ryan has once again given us main characters that seem perfect but are actually flawed and that makes us fall in love with them even more. Getting to their happily-ever-after isn't an easy journey for Cade and Janelle, and in the harsh glare of flash bulbs from the paparazzi and the spotlights of the world Janelle lives in, they learn the importance of having the other person's trust. Not once was I bored while reading Holding Her Close, and if I wasn't a fan of Lexi Ryan's before this, I am now. This gets 4.5 stars. ♥