Book Spotlight: Anatomy of a Player by Cindi Madsen 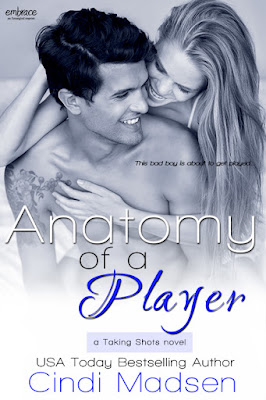 After getting her heart broken by a player again, Whitney Porter is done with men. She’s focusing on her future career and her first assignment at the college newspaper: Posing as a sports writer for an exposé on the extra perks jocks receive. But Hudson Decker, the bad boy of the hockey team, is about to test her resolve. To keep herself from breaking her no-sex rule with the temptingly tattooed athlete, she decides to use him for a side project: Anatomy of a Player, to help Whitney—and women everywhere—spot a player, learn what makes him tick, and how to avoid falling for one.

With his life spiraling out of control, Hudson Decker’s looking for a distraction. When his teammates bet him that he can’t land the gorgeous but prickly new reporter, he accepts the challenge, boasting he’ll have her in bed by the end of the semester. But Whitney is so much more than Hudson expected, and soon enough, he’s in too deep. The last thing he needs is another complication, but staying away isn’t an option. One thing’s for certain: this girl totally throws him off his game.

Read my five-plus-starred review of Anatomy of a Player.

Learn more about Anatomy of a Player on Entangled Publishing.

Add Anatomy of a Player on Goodreads.

About the Taking Shots series
About Getting Lucky Number Seven (book one) - Released: April 28, 2015 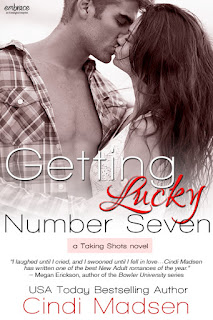 Lyla Wilder is done being the shy, chemistry nerd extraordinaire. While every other college student is out having fun, Lyla is studying. With her cat. Well, she’s played it “safe” quite enough, thank you. So she creates a “College Bucket List”―with item #7 being a night of uninhibited, mind-blowing sex…

But she needs some help from her man-whore best friend.

Hockey player Beck Davenport thought Lyla’s transformation would be subtle. Man, was he wrong. With every item she ticks off, Beck finds himself growing seriously hot for his sweet, brainiac best friend. And if he’s not careful, he’ll end up risking their friendship in order to convince Lyla that he might just be her lucky #7…

Read my five-plus-starred review of Getting Lucky Number Seven.

Learn more about Getting Lucky Number Seven on Entangled Publishing. 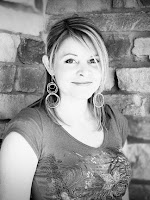 Cindi Madsen is a USA Today bestselling author of contemporary romance and young adult novels. She sits at her computer every chance she gets, plotting revising, and falling in love with her characters. Sometimes it makes her a crazy person. Without it, she’d be even crazier. She has way too many shoes, but can always find a reason to buy a new pretty pair, especially if they’re sparkly, colorful, or super tall. She loves music, dancing, and wishes summer lasted all year long. She lives in Colorado (where summer is most definitely NOT all year long) with her husband and three children.


(I think you get the point. And are now either horrified or impressed. LOL)


So, anything I left out? Why do you think athletes make the best players?

Note: Thank you to Cindi Madsen for an eye-opening and hilarious guest post and to Debbie Suzuki for facilitating. ♥