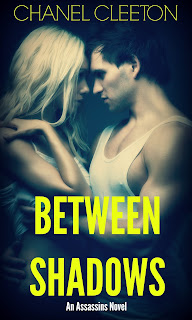 Between Shadows is the first novel in the young adult (YA) slash new adult (NA) romantic suspense thriller series entitled Assassins from author Chanel Cleeton. This is quite different from her Capital Confessions series, which I quite enjoyed (and still need to finish because I haven't gotten to the third and final book yet), but I love when authors can offer a variety of choices to their reading audience because it shows that they're not one-trick ponies or are stuck in just one genre. The main characters here are younger but no less interesting or formidable as those in the Capital Confessions books. The story itself is attention-grabbing and becomes far more curious as the both X and Luke try to find answers to the ever-growing list of questions that confront them when it comes to The Academy and all of the secrecy and lies.

X and Luke used to be a couple...that is, until she killed him. At least, she thought she had killed him. And that's just the beginning of the deception that goes on in the story. Luke is now an asset but he's learned certain things while in the field, things that cause doubts to surface. And then there's X who is every bit the trained assassin that she was meant to be, except there remains that part of her that still feels--the part reserved for her sister Grace, the part that leads her to confession after each killing, and the part that was all for Luke. The Academy has made them into the killing machines that they are, but these are people who are still able to think for themselves and can still be bombarded with emotions. The story is paced well and is packed with tension--both sexual and otherwise--as X and Luke struggle to make it out of the web of lies.

This is the kind of book that needs to hook you from the very beginning and you need to be invested in one or both of the main characters. Thankfully, X and her life story are intriguing and it's difficult to not empathize with someone so young, someone who has seen death time and again--death at her very own hands--and yet still carried with her that guilt of having taken a life. I was cheering X and Luke on until the end, and the events that led to that end were shocking, to say the least. I'm certainly going to keep an eye out for the next book in this series, and would recommend this for those who like their love stories peppered generously with danger. I'm not sure if the second book will still be about X and Luke, but I did like how Between Shadows ended and wouldn't mind a new set of characters for the next one. Four stars! ♥