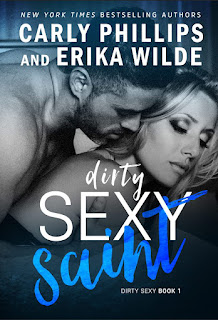 Bestselling authors Carly Phillips and Erika Wilde join forces for the good of all romance readers everywhere and have come up with a series entitled Dirty Sexy, which is about three brothers--Clay, Mason, and Levi Kincaid--and the dirty, sexy love stories they share with the women who make them want to believe in forever. Book one is about the eldest among the siblings, Clay, a thirty-three-year-old bar owner who became the protector of and guardian to his younger brothers when their mother failed to do her duty as their only parent. He's nicknamed "Saint" because of his desire to help those who are facing struggles in their lives, and when a gorgeous woman whose appearance told him she was privileged and pampered ends up in his bar and later asks for his help, he finds it too difficult to turn the temptress away.

Clay is the epitome of an alpha male, but it's second nature for him to help others, even though helping out Samantha Jamieson may cost him his peace of mind later on, considering being around her tempts his sanity to no end. I liked how these two main characters were able to bring out a side of each other that proved that they were far more suited than either one may have expected in the beginning. Clay was a highly likable hero, not just because of how he took care of Samantha, but also how he put his brothers first and how he continued to pay the kindness given to him forward. He may claim to be more sinner than saint, but the man is totally book boyfriend worthy. And then there's Samantha, who isn't some spoiled heiress. I loved her desire to be the woman she wants to be, not the one she's trained and expected to be.

Clay and Samantha's love story was sexy and sweet, and it served as such a great series starter, introducing readers to not just Mason and Levi Kincaid, but also to Katrina Sands, Mason's best friend and the manager of his tattoo shop. Even the people working in Kincaid's as well as Samantha's parents and ex-boyfriend were interesting, and I'm not all that sure whether they'll be earning in the two other books, but I'm glad that they weren't simply placed in the story for decorative purposes; rather, their presence provided greater insight into the kind of people Clay and Samantha were and how they led their lives. There were certainly a couple of surprises and the story, so kudos to the authors for keeping me on my toes. Dirty Sexy Saint is every bit the dirty and sexy read it promises to be and it deserves to get five stars. ♥