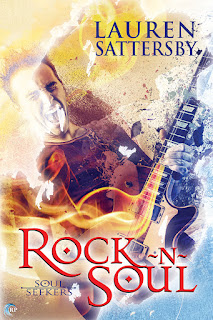 I smiled, and he smiled back.

It was at that moment it hit me: I was talking to a ghost.

I love it when I read a blurb, make a decision to read the book, and not only end up with a heck of a great story with scrumptiously witty and sassy dialogue and two of the most entertaining characters I've come across in a while, but also discover yet another debut author who ends up on "must-watch" list. Yep, Lauren Sattersby rocked my bookaholic soul with her first foray in the publishing world with Rock N Soul. I'm going to assume that it's the first in a series because I saw the "Soul Seekers" title on the book cover, but, of course, I could be wrong. Whether this is a series starter or a standalone, rest assured that I'm going to be keeping an eye out for whatever Lauren Sattersby offers us in the future. It's received a slew of fab reviews and rightfully so, because it's invigoratingly and creatively distinct from anything I've read in the romance genre, GLBT+ or not, as of late. I started and finished this in the wee hours of the morning, not once taking any sort of break, because it was just too damn good to put down for even a minute or two.

Meeting rock royalty like Chris Raiden should be a milestone moment for any fan, even someone like Tyler Lindsay who claim to only be somewhat of a fan of Incite the Masses, but when you happen to be the one to discover the lifeless body of said rock star, the would-be milestone could turn out to be more like a heavy boulder you're forced to drag around, because that's what happens when Chris's ghost latches on to Tyler. Through a hell of a lot of bitching and snarkiness galore, Chris and Tyler have to work together to figure out what will help Chris to cross over to wherever it is he's destined to be in the afterlife. What began with condescension and judgment transitions into an unlikely kinship between the two, and soon, without either of them expecting it, they start to see each other in a whole new, and far more enticing, light. As they come closer to fulfilling Chris's unfinished business, the reality that what has become the most important relationship ever in his life will come to an end causes Tyler to feel lost and heartbroken.

Theirs is a story that evolves over time and experiencing it as it develops into something more had me swooning like a fangirl at four in the morning. This isn't a case of like, love, or even lust at first sight. There are things neither understands about the other in the beginning, to the point that there are prejudgments made. I'm pretty sure that had it been possible, they would have gone their separate ways early on, but fate had other plans for these two. Heck, maybe it wasn't even fate, because this could have totally been a case of an accidental pairing that simply and fortunately led to something significant over time. There's a lot of wit and humor in the story, but there are also times that your heart aches, especially as Tyler and Chris made their way around Los Angeles. I know we're only two and a half weeks into January, but these two men and their story already ranks on my list of top favorite reads for 2016. Kudos to Lauren Sattersby and Riptide Publishing for providing readers a five-plus-starred book worth falling for with Rock N Soul. ♥