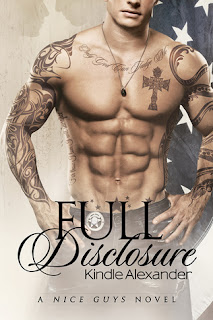 Mitch’s tongue brushed against his, and he moaned as he took in the sweet taste of his lover’s mouth. Mitch’s words blanketed his heart and embraced his soul; the moment was beautifully devastating, and Cody knew right then he’d never be the same man he was when he walked in this room tonight.

Well, hello again, Mitchell Knox! This guy was a scene stealer in Double Full, and he deservedly gets his chance at the spotlight and his own happily-ever-after with the second book in Kindle Alexander's bestselling Nice Guys series, Full Disclosure. As much as I loved Jace Montgomery and Colt Michaels's love story, I'm giving you full disclosure: this sequel is my favorite book in the series. Not only is Mitch the epitome of what a good man should be--a good son, a good friend, a good law enforcement officer, and a good lover--he also gets paired up with Cody Turner, who begins the story as the wallflower to Mitch's cocksure attention-getter, though not attention-seeker, but comes into his own as their relationship evolves. With romance, action, suspense, drama, and humor--oh my!--this book was a very fabulous read.

He may have not gotten the green light to openly pursue an investigation that connects the attempted murder of his friend Colt Michaels to a slew of other unsolved hate crimes, but Deputy US Marshal Mitch Knox is like a dog with a bone and refuses to let what he believes is an active conspiracy and serial killings fall to the wayside. He does, however, find one heck of a distraction in the form Texas State Trooper Cody Turner. If Mitch is the perennial bad boy, Cody is the picture perfect good ol' boy, and we have the citified US Marshal and countrified cowboy slash future Texas Ranger drawn to one another from the moment they lay eyes on each other across a crowded bar. The story becomes that of two things Mitch is pursuing: the truth behind the spate of hate crimes and time with the Texan rocking several pairs of Wrangler jeans.

This second in a series definitely has more suspenseful moments compared to its predecessors, and I do believe a lot of that has to do with Mitch being a US Marshal and the one heading the investigation regarding the murders and attempted murders of gay personalities. His pursuit of justice does put him, as well as those closest to him, at risk, and that's when the case becomes even more personal for Mitch. It's his protectiveness that makes Mitch such a swoon-worthy lead character, but he becomes even more irresistible when he makes it clear to Cody that he has no intention of letting the chance of getting to know each other better go. It's almost like a courtship of sorts, and when an alpha male Mitch lets his intentions known, he refuses to let anything--not even distance or an investigation--stand in the way of his happiness.

Aside from Mitch and Cody, Jace and Colt are also in this second book, and readers are introduced to Kreed Sinacola, Mitch's partner in the US Marshals Service and best friend, and Aaron Stuart, Mitch's fellow online gamer, friend, and hacker extraordinaire--both of whom get their story told in the third and final book in the series, Full Domain. One of the things I like best about each of these books is that they're distinct yet carry a familiar vein when it comes to one of the main characters eagerly letting the other main character know that they intend to be more than mere acquaintances. The age difference between Mitch and Cody--Mitch is thirty-three and Cody is twenty-six--was a nice touch because they're at different points in their lives yet still haven't found "the one". Full Disclosure raised the bar and gets five-plus stars. ♥