Review: Making a Comeback by Kristina Mathews (More Than a Game #3) 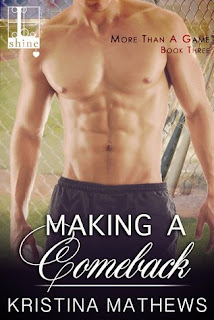 Making a Comeback is book number three in the Kristina Mathews-penned More Than a Game sports romance series and brings back two supporting characters who were introduced in the book number one, Nathan Cooper and Annabelle Jones. Those familiar with the series will remember Cooper as the San Francisco Goliaths player who failed a drug test and was subsequently suspended for fifty games and Annabelle was the then-wife of one of the San Francisco Goliaths owners who turns out to have been an investor in the company behind the performance enhancing drugs that Nathan took. This book stands out in the series because most of the story takes place away from the baseball field and the world of baseball in general. Cooper and Annabelle turn out to be neighbors down in Southern California, and when Annabelle ends up in a terrible car accident that puts an end to her return to the world of modeling, Cooper is the one who helps her out with caring for her twin daughters, but he keeps his baseball past a secret from her.

Being around Annabelle is a fantasy come true for Cooper, who turns out to have had a crush on her for the past decade. This felt like a case of insta-love, but I liked that they had to were continually earning each other's trust and acceptance. Marco Santiago and Hunter Collins-Santiago play pivotal supporting roles in Annabelle and Cooper's love story as well as in Cooper's journey to proving himself worthy of a return to the world of professional baseball. Unsurprisingly, communication is something Cooper and Annabelle had to work on, but theirs wasn't as bad as the miscommunication that occurred with the couples before them. Annabelle's participation in Cooper's comeback also felt a tad unbelievable--because I highly doubt that decisions like that are made based on an owner's being someone who likes love stories with happy endings--but it was an interesting touch nonetheless. Baseball was still a factor in this book, especially closer to the end of the story. Making a Comeback is my favorite book in this series so far with four stars. ♥