Review: For Seven Nights Only by Sarah Ballance (Chase Brothers #2) 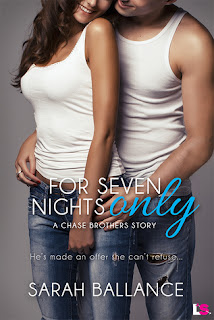 "Let me make one thing clear," he said softly. Intently. "Theatrics aren't my thing. I don't bullshit. If I say a woman is sexy, it's because I mean it. And if I say I want her, I mean that, too." He paused, giving a passing glance to Marmaduke, who was in a fierce tug-of-war with Sawyer's shoestring. The string appeared to be winning. "And make no mistake, sweetheart. Should you ever bring yourself to admit out loud that you want me to fuck you, assuming I'm not otherwise occupied, you damn well better brace yourself."


I'm not going to lie. My expectations for this second book in the Chase Brothers series were really high. I mean, after all, the first book, Five Things I Love About You was one of my top reads for 2015, and I so wanted author Sarah Ballance to bring me that combo of heart, heat, and humor that I fell in love with the first time around. So, did the author and the sequel, For Seven Nights Only, succeed or fail? If the five-plus stars I'm going to be giving it is any indication, then I would think it's safe to say that this second in a series was a rousing success in my book. Yup, Sawyer Chase and Kelsie Reed had me smiling, snickering, and swooning, making this two in a row for Sarah Ballance, with the series quickly becoming a favorite of mine already, even with two more stories to go after this. That bar's been set even higher this time around.

Sawyer and Kelsie live in the same apartment building and she's no stranger to the fact that he's a serial dater, rarely appearing with the same woman twice. It takes a leak in Kelsie's upstairs apartment for their paths to actually cross, and when Sawyer ends up chasing away Kelsie's blind date, he makes her an offer she can't afford to refuse, not with her sister's upcoming wedding to Kelsie's ex-boyfriend's brother. What ensues are so-called dates--a planned seven in total--that will have Sawyer teaching Kelsie how to be the kind of woman who will easily be able to snag any man she wants. Naturally, the two butt heads and push each other's buttons, making it appear as if they would never be interested in the other...except they ARE interested in one another, a fact that neither one acknowledges, so we've got frustration and pining galore.

Now, this wouldn't have been a complete Chase story if we didn't have the three other Chase brothers--Crosby (with Estelle), Ethan, and Liam--and their parents as well. I love the family dynamic that exists within this close clan. Each brother has a different persona, but they're all tied together by their love for one another and for their parents. Ethan is up next, and I'm already curious to see how his story will be treated, especially considering the heartache that he still carries with him after the death of his beloved wife. I'm invested in these four guys and with the two older ones already getting their happily-ever-afters in laughingly and lovingly Chase Brothers style, they'll be difficult to top, but if anyone can do it, I have no doubt that Sarah Ballance can. For Seven Nights Only gets my high recommendation and five-plus stars. ♥

Purchase For Seven Nights Only on Amazon | B&N | Kobo.