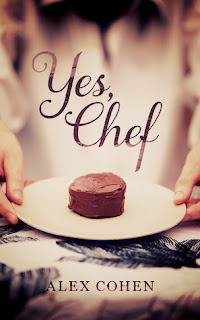 Yes, Chef is a novella set in the always fascinating (at least as far I'm concerned) world of professional kitchens and was written by Alex Cohen. Here we have Diego Ramirez, a forty-two-year-old executive chef in a successful and popular restaurant in Michigan known as The Local Dish, and Ben Walsh, a newly acquired twenty-nine-year-old (though that's only my educated guess based on the information about him in the story) pastry chef and the restaurant owner's nephew. Diego is wary of Ben, not only because of the nepotism involved in his hiring, but because of his attraction to this man who is much younger than him. The acrimonious end of his decade-long relationship has also left Diego jaded, so he keeps his distance from Ben, even though the attraction is quite mutual. Will it be too late before Diego comes to his senses?

Even though the story did drag for a while, what with Diego unable to actually pursue his obvious feelings for Ben but exchanging kisses with the guy when they least expect it, I liked how this was a slow romance. Yes, there were moments that I wanted them to get on with it already, but Diego's last relationship, which led to a broken engagement, scarred him, making him less likely to jump into another one, especially considering Ben was much younger than him and worked under him in the kitchen. Ben was a highly likable main character, wise beyond his years, and both Amelia Parson and Jesse (no last name) were great as supporting characters who pushed and prodded because if they didn't, Diego would still be stuck in neutral. Yes, Chef was a pretty good short story, one that works well as a quickie weekend read. Four stars. ♥