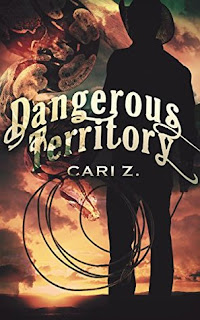 This short story is different from the Panapolis urban fantasy series from author Cari Z that I had the pleasure of reading and reviewing last year, but I love that Dangerous Territory isn't anything like those books because it showcases just how capable Cari Z is when it comes to writing tales that may be condensed in terms of length but no doubt pack a punch when it comes to storytelling and character building. Dangerous Territory has a cowboy named Carter Bly wanting to keep the legacy his father began intact but left with no choice but to make his own way after his treacherous brother-in-law stakes a claim. Carter's left with only alternative: to sell his cattle before his brother-in-law can sell his own and to do so, Carter'll have to pass snake-infested Mason Canyon, with his only help being a shifter guide named Rani.

The story is paced well and the relationship between Carter and Rani, one that begins as aloof and almost adversarial at times, evolves quite nicely. In less than fifty pages, we get a complete story, and it isn't one that simply has two men getting intimate. Both Carter and Rani are at points in their lives where they feel the need to show others what they're made of, that they're more than capable of the responsibilities that either await them, what with Rani being the future chief of his shifter tribe and Carter striking out on his own as a rancher. This is my third Cari Z read and I have yet to be disappointed, to the point that once I see her name connected to a new book, I won't hesitate to check it out. If you're a reader who's more about the quality of the book than the number of pages it contains, Dangerous Territory is a safe bet. Five stars. ♥