Review: Break Me Like a Promise by Aria Grace & Kyan Christopher (Promises #1) 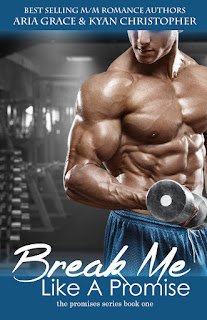 Aria Grace and Kyan Christopher have gotten together for a brand new series set in a gym called Sculpt and the people who work and work out there called Promises, with series starter Break Me Like a Promise introducing readers to four central characters, each of whom told the story from their respective points of view: brothers and Sculpt owners Tad and Brent Thomas, advertising executive Luke Baker, and Sculpt employee Marissa (whose last name I don't recall being mentioned). Another supporting character, accountant Beverly, also tells the story from her viewpoint, but she's the main antagonist in the story, and every bit the unlikable person she's portrayed to be. This was a really fast-paced story, one that was able to hold my interest and brought with it the creative touch of having more than the usual number of POVs.

Tad and Brent are fulfilling their dream of having a successful gym, but just like with any business, it takes a lot of their attention away from other priorities in Tad's life (i.e. his wife and two children) as well as puts limitations on certain other things on Brent's end (i.e. hooking up with employees and clients). They get along great with their employees and want to continue making Sculpt a household name. When tragedy strikes, it affects not just Tad and Brent but those closest to them as well. The tragedy itself was a shock, but so was another part of the story and the extent that one character went to in order to get what they wanted. Tad, being the older brother, has always been the one that Brent leaned on, but I liked how, when the roles were reversed, Brent was able to give his brother the support and patience that he needed.

This first book doesn't really end on what I would call a cliffhanger, but the story lines haven't really been fully resolved. I already like where Brent and Luke's story was leading, so I'm hoping they'll get a happily-ever-after by the time the series is over and not just a happy-for-now ending. Tad's story line is interesting and one that I suspect will continue to progress quite nicely in the second book, Trust Me Like a Promise. We got to see snippets of the four major characters' respective lives here, allowing readers to see how life was like for them prior to them falling in love with the person I'm assuming they'll end up with by series' end. Break Me Like a Promise let me appreciate the characters and their back stories. The Aria Grace and Kyan Christopher partnership looks to be off to a really good start and I look forward to more. Four stars! ♥

Purchase Break Me Like a Promise on Amazon | B&N | Kobo.