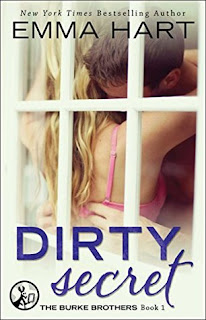 Dirty Secret is the first novel in the Burke Brothers series from bestselling author Emma Hart and is a second chance love story between the youngest brother, Conner, and the girl who ran and stayed away for two and a half years, Sofie Callahan. The reason behind Sofie's disappearance is made clear pretty quickly--she has a two-year-old daughter named Mila and the identity of the little girl's father isn't really a secret either, at least not to those who take one look at her and realize that she looks like Conner. A love child born out of wedlock is nothing new, but I liked that Conner's reaction to learning that Sofie took away his right to know that he had a daughter as well as taking away two years that he could have spent with Mila felt very real. There's anger and frustration and it doesn't pass after a chapter or two. I've read too many books where the father forgives and forgets too quickly and that just doesn't fly with me because it feels really contrived. Conner is conflicted because as much as he hates what Sofie did, he's still in love with her.

I didn't really agree with Sofie's reasons for doing what she did, but she 'fesses up, even if some of those reasons paint her as being selfish. Because let's face it--what she did what selfish, even if she thought it was her being selfless by giving Conner to freedom to pursue the one dream he and his brothers were always after--the success of Dirty B. But that belies the fact that she didn't trust him nor did she have any faith in their love for one another. So, I wasn't really a huge fan of Sofie's, and while I did like Conner and the fact that he took to being a father like a duck to water, he ran hot and cold for much longer than I would have expected. The best part about the book had to be little Mila since her precociousness was what stole the spotlight from Sofie, Conner, and the rest of the Burkes. Overall, I got a lot of enjoyment out of the story, even if I didn't always agree with the way the main characters acted and reacted. They're in their early twenties and obviously have a bit of growing up to do, rock stars or not. Dirty Secret receives four stars. ♥