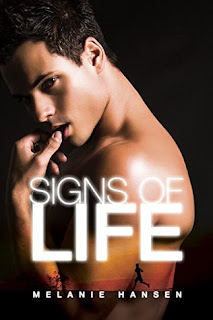 “It’s in everything you do. It’s in the way you worry about me, the way you take care of me, the way—the way you try for me. The spoken words are just a bonus.” They kissed again, and Kai whispered, “And even though I hate to ever see you hurting, I love that you let yourself be vulnerable with me, that you let me comfort you, let me love you. It’s not a burden to be there for you, it’s a privilege…”

I started Signs of Life soon after finishing the book that came before it, Everything Changes, in author Melanie Hansen's Resilient Love series, and if I thought the first book was great, me oh my, this second one had my heart squeezing in my chest from all the emotions it stirred up! One of the main characters here was briefly mentioned in the first book as Jase DeSantis's high school boyfriend and we were given an idea of the kind of tortuous experience Jeremy Speer was living through, but that doesn't compare to learning all the details of what happened. From the time he's informed that his husband Brent has gotten into a car accident to the time he says goodbye and then to learning about their unborn son, the pain and suffering that Jeremy experiences are things you wouldn't wish upon your worst enemy. When he uproots what's left of his life and moves from California to Oregon, it takes two years before that spark of interest in another human being is lit and it comes in the form of Kai Daniels, but things aren't that easy with them.

Jeremy and Kai hook up at a club and if you expect it to be the beginning of a love affair for the history books, you'll end up disappointed, but it's what makes this story so darn interesting! Jeremy walks away, feeling guilty since Kai is the first person he's even engaged in anything sexual with since Brent died, and while there's a moment of self-loathing at his actions, especially with his treatment of Kai, it's what gives Jeremy that a-ha moment that makes him want to focus on starting his own law practice and living one day at a time again. On the other hand, Kai can't believe that the person he believed he had a significant and intimate moment with--someone who felt a connection with--left him after he got what he wanted. It takes several months before their cross paths again and the fact that it's something neither of them could have ever anticipated happening opens the door to absolution, understanding, and redemption. And no, there's no insta-love nor insta-forgiveness here. Jeremy has to work for what he wants, as the man should, right?

One of my favorite things about this book had to be what Kai was doing for his students. As a former teacher, I've always believed that teachers--those who truly see what they do as more than an obligation or a source of income--impart more to their students when they go that extra mile, showing their students they care about their welfare and future and not just how well they'll do on an exam or if they submit their homework on time. Kai is the kind of teacher others should aspire to be, even if he is a fictional character. I'm not saying, though, that he was this perfect person. No. He made mistakes in the story, but the things he did, he did out of love, so even though I wanted to shake him when he made a couple of missteps, I couldn't fully fault the guy. His friendship with Loren Smith was a tad too close for comfort, and if I were Jeremy, I would have voiced my apprehension, but I got why they were as close as they were, and I held firm to the belief that Jeremy was Kai's HEA. Signs of Life is a favorite for 2016 and gets five-plus stars. ♥