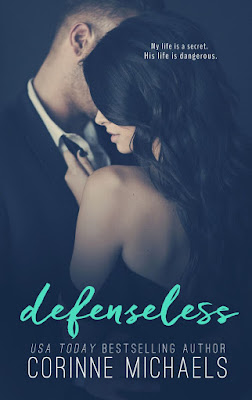 About Defenseless
My life is a secret.

His life is dangerous.

We’re both stubborn, calculating, and controlling.

Mark Dixon doesn’t know what he’s getting into. He doesn’t know his games could cost us our lives. I have to do what is necessary to keep us alive, and that means guarding my heart.

But I know I’m defenseless against him, and in the end, he’ll force me to surrender.

Read my five-plus-starred review of Defenseless. 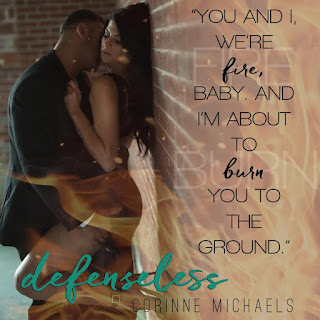 An Excerpt from Defenseless
Copyright © 2016 Corinne Michaels
All rights reserved.

No part of this publication may be reproduced, distributed, or transmitted in any form or by any means including electronic, mechanical, photocopying, recording, or otherwise without the prior written consent of the author.

This book is a work of fiction. Names, characters, places, and incidents either are products of the author’s imagination or are used fictitiously. Any resemblance to actual events or locales or persons, living or dead, is entirely coincidental and beyond the intent of the author or publisher.

“I made you a promise, Charlie.” Mark’s already deep voice is layered with desire.

Once again, my control begins to slip. “What’s that?”

His hands drop a little lower beside my head. His lower body shifts so his knee is between my legs. I feel his arousal against my thigh.

My traitorous body shows its own awakening. My nipples hardening through the silk material don’t go unnoticed. Heat pools in my core and my breath hitches. I want him. There’s no use denying it.

“I told you I’d kiss you again. If you don’t stop me now, there’s no getting away.”

I should stop him. I need to stop him. There’s no way in hell it’s going to happen, though. I’m craving his lips again.

He gives me one second before he crushes his mouth against mine. His entire body shifts forward, and now I’m trapped. There’s nowhere to go. Nowhere to move that’s not Mark. He takes every part of my mind and body. Our hands roam each other as his tongue slides against mine. Passion ignites between us; it sets the room on fire. His fingers cup my neck and then glide down the front of my dress. His hand brands my skin as he takes his time exploring the open skin between us.

My fingers grip the lapels of his tux, holding him, molding him to me. I can’t get close enough. Our mouths stay fused as we both lose control.

Then my mind snaps.

I push back and my hands fly to my lips. They’re swollen, bruised from the force of the kiss. His hands brace against the wall. I keep my eyes downcast. I can’t believe I just did that, against the damn wall, at a ball commemorating my father.

I shift my dress, rake my fingers through my hair, and pull myself together.

“Charlie . . .” Mark finally speaks. It sounds like shouting even though it’s only loud enough for us to hear. 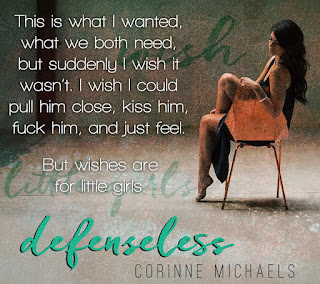 “That was the last time that will ever happen,” I say with no tremor to my voice. “Tonight we become partners. It’s not about whatever this is.” I shift my hands between us. “It’s about finding the information we’re both searching for.”

“And what if we find something else?”
“We shut it down. There’s no room for feelings in this world.”

Mark pushes back, giving me space. I instantly feel cold. “Okay, then. Have it your way.”

This is what I wanted, what we both need, but suddenly I wish it wasn’t. I wish I could pull him close, kiss him, fuck him, and just feel.

But wishes are for little girls.

About the Salvation series 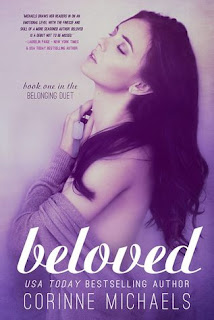 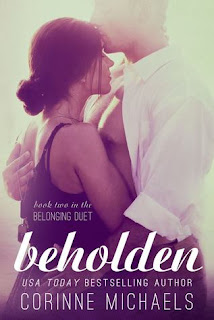 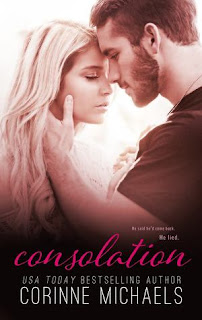 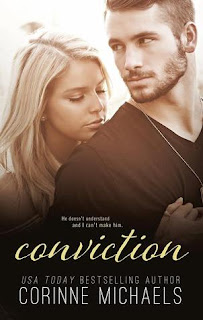 Catherine Pope has never been enough.
She repeatedly let’s men in—only to be left broken.

Jackson makes her feel alive, desirable, and consumes her with a fierceness she’s never known.
But Jackson struggles with his own past. His training as a Navy SEAL never prepared him for the battle to win her heart. He’s different, honorable, and worth the chance…but he must prove it.

If she gives him what’s left of her heart—will he protect it? Will she get the one thing that has always evaded her–to finally be someone’s beloved?

Beholden (book two) - Released: October 22, 2014
Catherine Pope got a second chance at love, only to have it ripped away—again. She should’ve known better.
But she dared to hope.
She refuses to let fate take the reins this time. Catherine decides she’s going to fight.

Jackson Cole risked it all.
He thought this time would be different.
With his loyalties pulling him in two directions—it’s time to make a choice…his past or his future.

Will they be beholden to their fears or will they both fight against their demons and finally find the love they both long for?

Consolation (book three) - Released: March 18, 2015
Liam wasn’t supposed to be my happily ever after.
He wasn’t even on my radar.
He was my husband’s best friend—forbidden.

But my husband is dead and I’m alone. I ache for him and I reach for Liam.

One night with Liam changed everything. Now I have to decide if I truly love him or if he’s just the consolation prize.

Conviction (book four) - Released: May 27, 2015
I fell in love with Liam only to be left shattered into a million pieces. Again. The idea of being without him cripples me but the reality is, he’s gone.

He doesn’t understand and I can’t make him.

If only he’d see the conviction behind my words—then Liam would still be here.

Corinne Michaels is an emotional, witty, sarcastic, and fun loving mom of two beautiful children. She’s happily married to the man of her dreams and is a former Navy wife. After spending months away from her husband while he was deployed, reading and writing was her escape from the loneliness.

Both her maternal and paternal grandmothers were librarians, which only intensified her love of reading. After years of writing short stories, she couldn’t ignore the call to finish her debut novel, Beloved. Her alpha Navy SEALs are broken, beautiful, and will steal your heart.