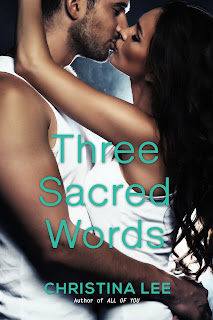 Christina Lee takes us back to the Golden Arrow Casino and to the Native American community that she introduced us to in the third book in her much-loved Between Breaths series, Whisper to Me--which was a friends to lovers story about Kai Nakos and Rachel Mattson--and provided a memorable backdrop for the Golden Arrow series starter, Two of Hearts--which was Dakota Nakos and Shane Garrity's second chance romance. While reading those two aforementioned books is not absolutely necessary before heading into this new one, I'm going to recommend you do so anyway. That way, you'll have a better idea of how all the characters connect to one another and to the Golden Arrow. Read the Between Breaths series while you're at it. The two series are not directly connected but they're both good, as well as personal favorites of mine.

In this second Golden Arrow novel, Three Sacred Words, she gives us Meadow Starr and Alejandro "Alex" Flores, both of whom were supporting characters in the first novel. Meadow is a single mother with a six-year-old child named Joaquin to raise who relies solely on her income as an employee at the casino and her handmade jewelry business. Her ex-boyfriend sporadically makes his presence known by sending child support and getting in touch with Meadow every now and again. It's this connection that leads Alex, a US Marshal, to return to the community and to interview Meadow. Her ex is a wanted fugitive due to his drug dealing and crimes related to it. Meadow and Alex already noticed one another the first time Alex was there--the story of which can be read in Two of Hearts--but now they're in closer proximity to each other.

Both Meadow and Alex are in a dilemma that neither one of them can really do much about. They're both drawn to one another, but Meadow is unsure about providing assistance to the man after the father of her son. On the other hand, Alex has a job to do, but Meadow and Joaquin are proving to be formidable distractions, as are his feelings for mother and son. Avoiding one another is an impossibility, and the more time they spend together, the more it becomes clear that their attraction isn't fleeting. If anything, trying to not cross that line makes them even more aware of each other's presence and how they react when the other one is in their vicinity. I liked that there was nothing rushed or instantaneous between Meadow and Alex. Even the hesitation and wariness were welcomed because they felt like authentic and real reactions.

This story, like its predecessor, brings with an element of suspense, because Meadow's ex is a wanted man and Alex is doing everything possible to locate him and bring him in. We know who he is and what kind of man he is, but we have no clue where he is, and so when he makes his re-appearance, it takes you off-guard because there wasn't an over-escalation of violence or the like prior to it happening. It's this subtlety that I've come to appreciate in Christina Lee's writing. I've read all her books and she's never been an in-your-face storyteller, allowing her readers to feel and experience what's happening in the story, right along with her characters. She's done exactly that with Three Sacred Words, a book about how sacred yet attainable love, family, and hope are when you're with the one person you're meant to share them with. Five stars. ♥