Review: Better Than Perfect by Kristina Mathews (More Than a Game #1) 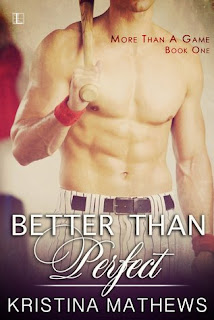 Better Than Perfect is the first book in the More Than a Game baseball romance series from Kristina Mathews and focuses on Johnny Scottsdale, nicknamed "The Monk" for both his ability to block out distractions while he's on the mound and his supposed preference for celibate while playing, and Alice Harrison, his ex-girlfriend who ended up marrying his best friend soon after she ended things with him. I liked that Johnny was more of an elder statesman on his team, becoming the leader they need, and while he's achieved a lot in his stellar career, he wants to close out his playing days with a World Series championship under his belt. Being part of the San Francisco Goliaths, though, brings with it one huge distraction in the form of Alice, and aside from her hurting him nearly a decade and a half ago with a betrayal he never saw coming, she's keeping one heck of a secret from him. The story is focused on the their reunion and secret, although Bryce Baxter, Johnny's teammate, is a standout supporting character.

Second chance romances like this that have a secret being kept from the hero are fairly common and it isn't really much of a secret since readers can pretty much predict what it's going to end up being. While Johnny was a likable main character, it was difficult for me to like Alice, especially since she was doing this whole back and forth thing when it came to telling Johnny her secret. I know that she claims there wasn't any sort of overlapping between Johnny and Mel Harrison, Johnny's best friend and later Alice's husband, but then why all the uncertainty about the "origins" of the "secret"? And can I just say that Zach Harrison proved to be far wiser than others gave him credit for? There was a lot of indecisiveness when it came to Johnny and Alice and what their next move would be when it came to their relationship, but Zach knew what he wanted, making the adults around him come off as clueless and childish when it came to waffling. For a series starter, I was looking for more information about the team, so Better Than Perfect gets three stars. ♥