Review: Anatomy of a Player by Cindi Madsen (Taking Shots #2) 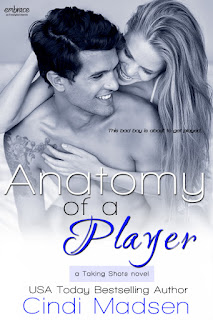 I'd vowed to be strong enough to keep myself from slipping and falling for Hudson, but now that he was clearly done with me, it didn't feel like some big win.

It felt like I'd just lost something that I didn't know I had.

This sequel had a lot to live up to, and with me reading it soon after having finished its predecessor, Getting Lucky Number Seven, it was up against the high that left book with. But, I must say that Cindi Madsen outdid herself with Anatomy of a Player, not just giving Whitney Porter, who was memorable in book one as Lyla Wilder's supportive roommate, a chance at having her own happily-ever-after but it also gave fans of the series a book boyfriend-worthy lead male character in Hudson Decker. This wasn't just a new adult (NA) love story either; there are important and timely issues that the book brings up and tackles, inspiring you to take the time to contemplate and ask yourself where you stand. This second in a series was different from the book that came before it but still had that squee-worthy romance we desire.

I actually had to go back to double check if I had missed Hudson in the first book, but I didn't. He's a new character but he was already part of the team when Lyla Wilder and Beck Davenport fell in love in book one. Whitney is already someone readers of the first book should be familiar with, and after getting her heart broken then, this girl so needed a guy who would see her as more than just a temporary hook-up. While Lyla and Beck had a solid friendship to start with, Whitney and Hudson don't have the most auspicious of first meetings, what with Hudson being drunk and coming on to Whitney hours after her latest non-boyfriend ended their non-relationship. With Whitney's vow to stay away from athletes, she takes one look at Hudson and sees him for the player that he is, automatically adding him on her crap list.

In order to be given a position on the school newspaper, Whitney is tasked to write an investigative article on the hockey team and the special privileges, if any, that they receive from the school. This brings to the forefront the popular assumption that school athletes do, indeed, get preferential treatment from the administration, including more lax expectations when it comes to academic performance and output. But you know what they say about making assumptions... The problem with this generalization is that, while the probability of special treatment is high, it doesn't automatically mean that the athletes have it easy. I liked that the author didn't insist on one viewpoint or another. If anything, she presents all sides of the story so that the picture we are presented is really more complete than you would expect, so kudos to her.

The other thing issue that was highlighted in the book was how people are treated a certain way based on how they look. Whitney was treated differently when she donned more conservative outfits compared to when she dressed normally, playing up her natural assets. I more than appreciated how she made assumptions about Hudson and his being a player and about the athletes and the privileges handed to them but didn't like when her peers made their own assumptions about her simply because of how she looked on the outside. It's far too easy for us to label other people and to form opinions based on perceptions that often have no actual basis. Hudson may have been a player, he was also more than that; like Whitney was a beautiful girl who had more than merely her looks. Five-plus stars for Anatomy of a Player. ♥

Purchase Anatomy of a Player on Amazon | B&N | Kobo.