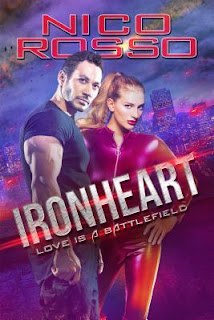 Take one angry and bitter superhero and the super heroine who broke his heart both left with no other alternative but to join forces and you've got yourself one action-packed urban fantasy novella in the form of Ironheart. This Nico Rosso-penned story was originally part of the Holding Out for a Hero anthology, also from Entangled Publishing, that was released three years ago. This novella feels like a series starter, and based on the author bio at the end of the story, the mention of other Heroes Guild stories has me thinking it is indeed the first of several to come. If it isn't a series starter, it certainly has the potential to be one, especially because there are other heroes mentioned here, and the world that Nico Rosso has created is one demanding to be further explored, so hopefully, we'll have several more stories to look forward to.

Vince and Kara used to be lovers until Kara upped and left, breaking Vince's heart. Her sudden return isn't the amorous reunion she makes it out to be, leaving them on opposite sides yet again. But there's an enemy out there that'll force them to work together if they have any hope of surviving. What's interesting about the story and characters is how Vince and Kara may hope and wish to separate themselves from the superhero alter egos--The Anvil and SnapDragon--but it's futile because being superheroes is part of who they are. They aren't ordinary superheroes either, and while Vince may seem to work best on his own and Kara is already part of a team, it's when they work as one unit that these two prove to be most formidable.

The story is fast-paced and you can pretty much read this in an hour or even less, but don't let the less than a hundred pages fool you because there's a lot that goes on from start to finish. There's never a dull moment in Vince and Kara's story, and this isn't purely a second chance romance between two superheroes because we do get to see them showcase just how darn fantastical they are when they're up against a common enemy. Vince and Kara aren't your run-of-the-mill heroes who don capes and drive supercharged cars, and it's easy to get swept away by their fun story. Ironheart gets four out of five stars. ♥