Review: Without You by Lindsay Detwiler 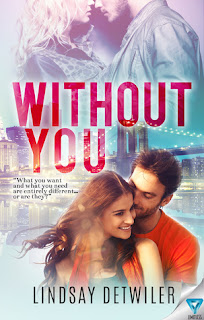 Without You is a standalone contemporary romance from Lindsay Detwiler and is the story of a married couple that find themselves at a point in their relationship where everything seems to have gotten too lax and too routine. We've read countless books that have the couple meeting and then working their way toward their happily-ever-after. The difference with this book is that Camden and Jenna Landsen have already gotten their happily-ever-after...or have they? Because, if we're being totally honest, all relationships are constant works in progress. Anyone who tells you otherwise is lying or delusional. And while Camden and Jenna have indeed fallen in love and still love each other, they've reached a plateau of sorts. Their story isn't the usual fare you find in romance novels, making it stand out in terms of creativity.

I'm going to be totally honest here and say that I had no affection whatsoever for Jenna. She was dissatisfied, and while I don't take away from any spouse the right to feel that something is lacking in their marriage, she seemed to be too busy finding fault in Camden and not really looking at whatever her faults may be. She was the opposite of Violet Streiff, who so deserved to have her own happily-ever-after. It's often difficult for me to fall in love completely with a book when I'm feeling less than thrilled with one of the main characters. Between the two, Violet was my favorite heroine and her story was simply the far more inspiring one. She suffered heartbreak but she persevered and refused to wallow or whine for long. Jenna had the kind of life that Violet imagined herself having and Jenna failed to recognize what she had.

It took a good long while for the story to really get going only to have the ending feel rushed and overly idealistic. I also would have liked some perspective from the men in the story, especially Camden's because its his marriage that sits precariously at a precipice and it seemed as if Jenna was the only one suffering and had all this power as to what would happen next. While I do have my criticisms, I did like Lindsay Detwiler's writing and appreciated how she was able to put together a story that wasn't like every other story you find on bookshelves. The book makes you take a step back and consider what you would do if you found yourself in the same predicament as the characters and a book that's able to do that will always get kudos from me. Without You is a 3.5-starred look at love and how happiness should never really end. ♥

Purchase Without You on Amazon.