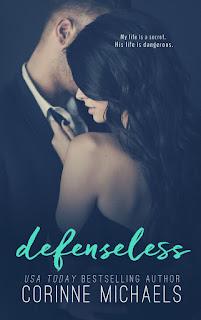 He grips my arms, pulling me close again. "You think I don't know this? Every single day I watch people around me suffer because of choices I made as well. I'm well aware of the bigger picture. But you..." his tone softens, as do his arms, "Make me forget for a minute. You're like some goddamn addiction I can't shake. I'm known for my self-restraint, so what the hell have you done? Why the hell do you consume my fucking mind?"

Corinne Michaels is an author who's been on my radar since last year and her first four books are patiently waiting for me to get to them on my tablet. When the opportunity to read and review Defenseless, the fifth novel in her bestselling Salvation series, came about, I shucked my usual rule regarding series and jumped in without having read any of the books prior. And while there were definitely moments that I felt a bit lost not knowing the history among this set of friends, I was still able to fully enjoy this book. There appears to be a story arc that runs throughout the series, one that is resolved in the latest addition, and because I'm so darn curious about Jackson Cole, Liam Dempsey, and Aaron Gilcher, as well as Natalie Gilcher and Catherine Pope, both the Belonging and Consolation duets have worked their way to the top of my to-be-read list. Now that I've put that out there, time to re-focus our attention on the book of the hour--Defenseless--and the enigmatic yet superbly enticing love story between Mark Dixon and Charlie Erickson.

Mark is a former Navy SEAL now working with his best friends in a private security firm but wants answers as to who's been trying to cause trouble for them, while Charlie is a CIA operative bent on learning the truth about her father's murder. Both know firsthand the kinds of danger that their respective occupations can bring about, but when it looks as if they're after just one individual, they're forced to partner up. Trusting one another is easier said and done and the book examines how Mark and Charlie try to work through gaining that trust and offering it in return, both personally and professionally. These two have a lot of back and forth, especially since Mark seems to enjoy pushing Charlie's buttons just to get an honest reaction out of her, and those are the moments that provide a great deal of entertainment. It felt like foreplay, and if you were to ask Mark, I'm sure he'd readily agree to that notion. The chemistry between the two of them was sizzling, crackling and popping, even during the times they would butt heads.

There were quite a few lighthearted moments in the story, most of them courtesy of Mark, who appeared to be the one among his friends to make jokes, tease, or poke fun just to get everyone else to relax and loosen up. And yes, he came off as quite cocky and sure of himself, but like Charlie pointed out, there was much more to him than the guy who could make everyone else smile or laugh. He was a loyal friend who would die and kill for those who meant most to him and a fierce warrior who fought for what he believed in. From the beginning, you could see that he was all in when it came to Charlie, and even the constant badgering regarding her real first name may have come off as him merely trying to irritate her, but I think he wanted that piece of Charlie that she kept tucked away and only shared with her family. Speaking of Charlie, she was the perfect fit for Mark. She didn't back down from his alpha maleness, but I liked how she evolved into this woman who slowly opened herself up to the possibility of something real with Mark.

Aside from the romance aspect found in the book, I quite enjoyed the action and mystery that swirled around not just Mark and Charlie but members of the Cole Security Group. There's a fair bit of espionage that goes on and I found myself trying to figure out the clues that were unearthed here, though I do think that had I read Beloved, Beholden, Consolation, and Conviction before reading Defenseless, I would have had a clearer idea of how far back everything was connected. With the supposed end of the story arc--I'm labeling it as "supposed" because you never know with these things--I'm curious to see as to how Ashton Caputo and Quinn Miller's story will play out. The one supporting character I'm most curious about, though, is Aaron Gilcher, and if he gets his shot at finding happiness again after everything that happened in the third and fourth books. I haven't even read the first four books and I'm already antsy for whatever comes next. It took one book--Defenseless--to make me obsessed; that's why it's a five-plus-starred read. ♥