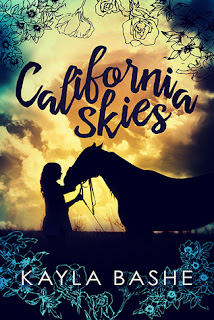 California Skies was a refreshingly different Western romance from what I've read before and Kayla Bashe's writing is understated but carries with a beauty that allows the reader to fully immerse themselves in the story that is before them and feel a kinship with the main characters. After the murder of her brother, the maiming of her sister, and the scarring of her face, Maggie Valerian sets forth to find the one person who can help her find hidden family-owned emeralds that those who harmed her and her siblings were after while keeping her safe: her brother's best friend, non-binary bounty hunter California Talbot.

It's been eight years since California and Maggie last saw each other, and while the kinship that's always been there still exists, there's now an awkwardness of sorts, brought about by their heightened awareness of and attraction toward each other. As much as California and Maggie are different, there's an undeniable connection between them, as well as feelings that neither one believes could ever be reciprocated. I liked how extraordinary these two main characters were, showing that things out of the norm can often be good because they open our eyes to even more untapped possibilities. California Skies gets 4.5 stars out of five. ♥