Book Spotlight: Into the Fire by E.L. Todd 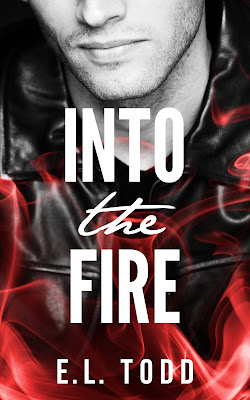 About Into the Fire
Ash

Despite everything I've done for my parents, I'll never be good enough for them. Instead of seeing a man to be proud of, they just see an embarrassment. I served four tours in Afghanistan but that doesn't mean anything to them. They only see the ink, the party life, and my short stint in jail.

Because they needed me.

But now they refuse to pay me back until I become the man they think I should be.

I have an unusual professional.

I escort men, acting as their date to family functions or work parties. It's my job to act deeply in love with my client. And I always nail it.

But it's not what you think.

I'm not a prostitute.
I'm not a call girl.
I'm an actress.
Get it right.

There are strict rules when it comes to my profession. There is no touching, kissing, or anything but hand-holding. Those who choose not to comply will get a swift kick in the nuts.

But all this goes to hell when Ash walks into my life.

Read my four-starred review of Into the Fire.

Add Into the Fire on Goodreads. 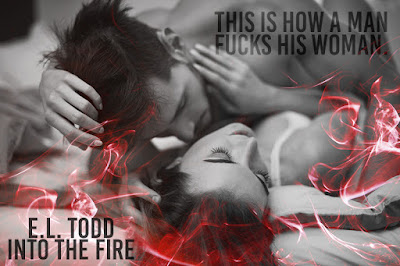 An Excerpt from Into the Fire
I sat up then ran my hands up his chest. “You want to know a secret?”

“Well, that’s not a secret, sweetheart.”

My hands went to his jeans and I unbuttoned them then pulled down the zipper.

Ash watched me with dark eyes.

I got his jeans off then saw his long definition in his boxers. It was thick and moved all the way down to his thigh. “Wow…”

I pressed my lips to this tip through the material and gave him a gentle kiss.

Ash’s eyes widened and he released a deep moan. “Whoa…sweetheart.”

I grabbed his boxers and tugged them down.

I pouted my lips. “Why the hell not?”

“Because I’m not going to take advantage of you.”

“Even so, last week you told me no. I know you’re only saying yes now because you’re drunk. That’s not how I do things.”

He chuckled. “Excellent way to get into a man’s pants.”

“I’ll tell you what.” He kneeled at the foot of the bed with his torso between my legs. “If you still want to when you wake up in the morning, I’ll rock you so hard your bed will break. How about that?”

“But I want it now…” My hands moved down his chest.

“I’m sorry.” One hand moved through my hair. “Take it as a compliment.”

“You’re rejecting me. How is that a compliment?”

“I’m rejecting you because I care about you. I want to know you want me, not just because you had too much to drink. And I don’t want to be something you regret.” He tucked my hair behind my ear. “Even drunk, you can understand that, right?”

“Good.” He stood up then pulled his t-shirt off.

Ash was a solid slab of muscle. Prominent lines of muscle divided the different areas of his body. His torso was flanked with power and strength, and the muscle of his ribs looked like lines of sand in the desert. His stomach contained an eight pack, full of grooves and valleys. And his chest was wide and expansive. Both of my hands couldn’t take up half the area. “I usually sleep in the nude but I’ll sleep in my boxers tonight.”

“I want you to be comfortable…don’t mind me.”

He chuckled then pulled the covers back. “Come on. Get into bed.”

“Are you trying to torture me?”

That stupid grin was on his face. “Change and let’s go to bed.”

I eyed his t-shirt on the floor then snatched it. I pulled it over my dress then removed my dress from underneath.

His shirt reached past my thighs and made me feel smaller than I already was. I crawled up the bed then lay in the sheets beside him. “Your shirt smells good.”

“It’s my natural scent so I’m not surprised.” He turned on his side and faced me. Then he wrapped his arm around my waist and pulled me close to him. “For what it’s worth, I’m going to be hard all night.”

He chuckled. “I would love to—in the morning.”

“I thought you were a dick?”

“Then why are you being so sensitive right now?”

“I’m a dick because I sleep around and tell women they aren’t getting shit from me. But I’m not an ass. I don’t lie and act like I’m something I’m not. No woman ever has to wonder where our relationship is going. And I don’t take advantage of women. A little buzzed is fine, but totally drunk like this isn’t right. And I don’t need to get a girl drunk to get her into bed. Besides, I’m your friend. What kind of friend would I be if I totally used you when you were most vulnerable? That shit is fucked up.”

Now I felt like an idiot. I put myself out there and got rejected—coldly.

“Hey.” His voice came out gentle. “Saying no wasn’t easy. You know how attracted I am to you. I sincerely hope you still want it in the morning. Because my morning wood is going to be bigger than usual.” He leaned in and gave me a gentle kiss on the lips. His mouth was soft and delicate. Even though the touch was innocent, it somehow made me melt. “Good night, sweetheart.” 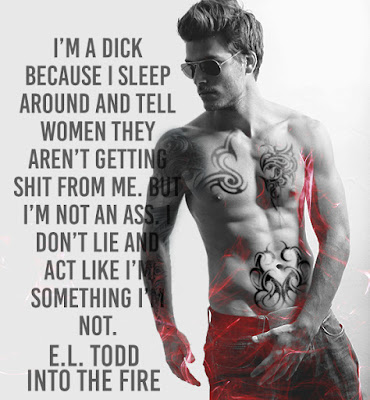 Amazon bestselling author E.L. Todd was raised in sunny California where she still lives today, claiming it’s the best place in the country. Easily hypothermic and hateful of the cold, she prefers to be warm all year round. She attended California State University, Stanislaus and received her bachelor’s degree in biological sciences, but still pursued her dream to be a writer. She’s written several novels and many series’, and her imagination can’t seem to stop. She tries to find the good in people and she exploits that in her writing, proving that people can make mistakes and rise above their past. Her hobbies include sunbathing, swimming, eating at Surf Taco in San Diego, reading, and learning everything she can about hippopotamuses, her favorite creature. Her greatest dream is to make people forget about the harshness of reality and dive into a good story with lovable people. When fans tell her they love her work, it gives her the greatest sense of accomplishment.