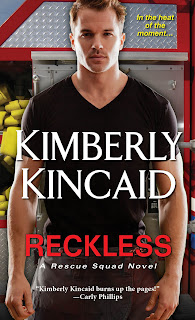 There's something about a firefighter for a male lead character in a romance novel that makes you expect the story to be hot (pun intended), and hot is exactly what Alex Donovan is in Kimberly Kincaid's Rescue Squad series starter. Reckless is what people think of when Alex comes to mind. He's an eight-year veteran of Engine Eight, and while he's one of the best firefighters around, his reputation for being too much of a risk taker isn't a good one. When he disobeys an order and pushes a rival squad's captain in the process, his own captain is left with no other choice but to take him to task for his actions. He's put on unpaid leave and mandatory community service for four weeks at a soup kitchen called Hope House. He could probably charm his way out of it...until he realizes the director is Zoe Westin, his captain's one and only daughter.

Reckless is one of those books that draws you in with its storytelling, creating clear and crisp images in your head, and with a cast of characters that pique your interest, led by two main characters who have a heck of a lot of chemistry and try to ignore the attraction swirling between them. I really liked Alex and Zoe, two people who are driven by their passions--Alex with his firefighting and Zoe with her work at Hope House. She may seem like the kind of person who plays it safe, but her actions belie such a notion, and Alex sees that side of her that she tries really hard to repress or pretend doesn't exist. They build a foundation for their relationship, and that's one of the things I loved about this book. They don't rush into anything, even Alex who tends to act first and go with his gut. Once they do get together, it's all fireworks.

This is my first Kimberly Kincaid read, but it definitely won't be the last. Not only am I already looking forward to reading the next book in the series, but I'm curious about the series that came before this one. Pine Mountain's last release in 2015, All Wrapped Up, was about Nick Brennan--who happens to be a former member of Engine Eight before a career-ending injury and is one of Alex's friends--and Ava Mancuso, who also makes an appearance here in this series starter. The author's writing quickly drew me into this story and the community of firefighters and EMTs that I'm sure we'll be seeing more of throughout the Rescue Squad series, and this book did exactly what it was supposed to as the starting point of a new contemporary romance series. It's got heat and it's got heart, and Reckless gets 4.5 stars. ♥