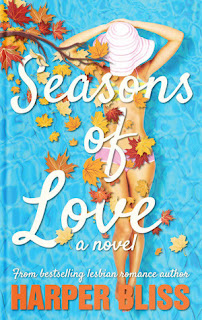 I've read a number of Harper Bliss's books, and I do believe that I've found myself a new favorite with her latest release, Seasons of Love. This was such a beautifully told story about fifty-one-year-old Alice McAllister, a solicitor who co-owns a self-started business with her best friend, and twenty-nine-year-old Joy Perkins, Alice's best friend's daughter. At the insistence of her best friend Miranda Jones, Alice takes a two-week vacation in Portugal but the solitude she thought she would have is soon lost upon the arrival of Miranda's daughter Joy. Alice and Joy are opposites, but Joy constantly prods at Alice and Alice's own curiosity of the young woman who surprises her by admitting that she's a lesbian is at an all-time high. The vacation in Portugal changes their relationship to more, but it is Alice who undergoes the greatest change.

Seasons of Love is Alice's journey of self-discovery, and it's one that often has her taking a step back, unsure of what her feelings for Joy mean and why this is happening to her at her age. Joy may be seen as somewhat flighty compared to the more composed Alice, but it's Joy who encourages Alice to see a new side of herself, one that she's hesitant to fully embrace and share with the rest of the world. The age difference is one thing, but it's the fact that Joy's mother is also Alice's best friend that presents the greatest source of conflict, especially since Miranda isn't exactly all that encouraging of Joy's sexuality. Because of this new chapter in Alice's life, she is faced with challenges and issues that she'll have to overcome, and I love that these were not swept under the rug or hurdled too easily, giving it authenticity.

The dynamic between Alice and Joy was one of the most interesting aspects of the story. There are things about Joy that Alice doesn't fully relate to or comprehend. They're at different stages in their lives, but while Joy is still trying to find a place in the world professionally, Alice is now finding her new place in the same world personally. Does age really matter in a relationship? If we're being totally honest, it does, but I think that if a relationship is strong enough to deal with whatever conflicts come along because of a difference in age, whether just a year or two or decades more, age doesn't have to be as huge a factor is some people tout it to be. Miranda's reaction towards the relationship was harsh but I think it was presented realistically, which I quite appreciated. Seasons of Love is a highly recommended five-star read. ♥

Purchase Seasons of Love on Amazon.