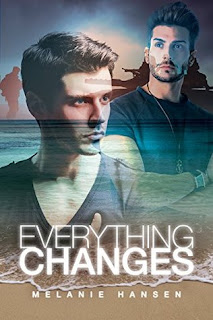 Everything Changes is the first novel in the Resilient Love series by author Melanie Hansen and was her debut release less than a year. This was such an amazingly well-told story about two best friends who are more than tempted to cross that line that would make them far more intimate, but if one of them is resistant to the idea of being with another man, is there really any hope for any kind of future together? That's the hurdle that Jase DeSantis and Carey Everett are up against. There's no denying that they've always had this closeness that they've never had with any of their other friends or with any other person in general, and Jase has been in love with his best friend for half the time they've known one another. While Jase is openly bisexual, Carey is and always has been straight, but the chemistry between them is scorching hot. Will a short-lived affair suffice and help them get rid of whatever itch they need scratch, and possibly end up adversely affecting their friendship, or could this maybe lead to a committed, lasting relationship?

This was my first ever Melanie Hansen read and from the get-go, she had my attention. By the end of it, she had my devotion. I absolutely loved this friends to lovers story and fell in love with Jase and Carey. The length of their friendship may not be in the decades, but after what they went through while serving together--Jase being a Navy medic and Carey a Marine--the kinship and closeness they share is more than understandable. Jase is the kind of person you want by your side because you know that you don't even have to call upon him when you need him most; it's simply a given that he will be. The affection between the two is genuine, even when they were "just" friends, so when conflict strikes--as you expect it will--your heart squeezes for both men, although, I confess that I empathized more with Jase than I did Carey. If you've read the book, you'll know why. If you haven't read the book...well, hop to it already! Of course, I'm not saying Carey was a bad guy. No, he wasn't. Confused and in denial, yes, and I wasn't surprised he was.

There's quite a bit of internal conflict that goes on within both Carey and Jase, more so in Carey's case because he had always seen himself as heterosexual. Naturally, the sexual draw he was having towards Jase had him thinking it was nothing more than a phase, especially since Carey had never been attracted to another man prior to his best friend. I will admit that I was kind of surprised at how quickly and easily everything happened when the two decided to finally act on their attraction, but then, as the story went on, it turned out to be one of those things that felt more like them being stuck in a dream-like state or in their fantasies coming true, so that when reality struck or the real world came knocking, life wasn't so peachy anymore. And through it all, I must say that I really liked Jase's friends, especially Quinn and Layla Patterson, the drummer in and the manager of Eloquent Isolation, respectively, and how protective they were of Jase. Everything Changes was a great series starter and I highly recommend this five-star novel. ♥